Nairobi (KON) - At least 370 people have been killed and over 1,075 others injured in terrorist attacks since October 2011 when Kenya took the war against terror to the Al-Qaeda-linked Al-Shabaab terror group in Somalia, according to an analysis of reports by The Standard.
Article Keydmedia Online
18 August 2014 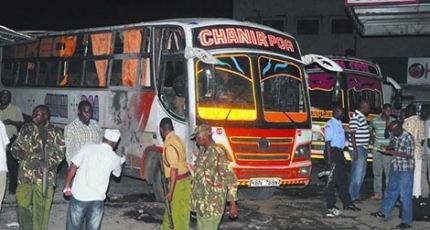 This translates to the terrorists killing one person every three days on average or that one terrorist attack has been occurring somewhere in Kenya after every 11 days since October 2011 since the start of Operation Linda Nchi.

This gives a glimpse into the human cost of the war against terror.

The Standard sought official police statistics to dispute or corroborate our independent findings, but a letter sent to the Inspector General of Police requesting for the numbers remained unanswered by the time of going to Press.

The latest attack on August 4, which was largely under-reported where about eight armed men hurled grenades at the Mandera County Government offices, marked the 100th successful attack in the country since October 2011.

The Mandera attack happened weeks into the first anniversary of the Westgate attack in which 68 people were killed in one of the deadliest attacks under the Uhuru administration and over 175 others injured.

Among the victims include a sitting member of Parliament, a pastor who was praying for hunger victims in a Garissa church, and a child sitting on her mother’s laps, among hundreds of Kenyans from all walks of life.

Financially, the war has also cost the country significantly. Figures in the public domain show that Kenya has spent over Sh26 billion and this will rise after the cost of equipment is fully factored in.

The African Union Mission in Somalia (Amisom), under which the Kenyan troops are now fighting, is also spending billions.

For instance, Amisom pays Sh4.3 million (US$50,000) to beneficiaries of Kenyan soldiers killed in Somalia alongside Sh88,480 (US$1,028)per month in allowances to thousands of soldiers serving in Somalia. The government argues that the cost of not fighting Somalia would be steeper on the economy.

Figures compiled from a mix of official police reports as released to the media and independent numbers reported by the media show that Nairobi and Garissa counties have borne the greatest brunt of the attacks, accounting for more than half of the successful attacks.

Only nine out of the 47 counties have witnessed terror-related attacks, and apart from Nairobi, the rest border Somalia or the Indian Ocean.

Hand grenades have been the weapon of choice for terrorists, alongside improvised explosive devices, landmines, bombs and guns, as well as machetes in cruder attacks like the ones in Lamu.

There are those victims of the attacks who also went ahead to die in hospitals, meaning that the number of fatalities could be more. For instance, in the July 1, 2012 church attack in Garissa, one victim died several days later while undergoing treatment at the Kenyatta National Hospital (KNH).

But these numbers are just a drop in the ocean compared to the immeasurable pain and suffering of survivors and those left behind to face a future of horror, with broken limbs, disfigured or worse still, those left without their breadwinners.

While seeking to downplay the threat posed by its continued stay in Somalia, President Uhuru Kenyatta told the world last week that even before the nation sent its troops into Somalia, it had already tested the pain of terror on a number of occasions.

But days after he returned into the country, the President announced what is now his first major reshuffle in his government, changes that also came with the resignation of the country’s top spy, Michael Gichangi.

Indeed, before October 2013 when Kenya Defence Forces (KDF) marched into Somalia to take the war to its doorstep, there had been the 2002 Kikambala terror attack at Israeli-owned Paradise Hotel, and earlier the 1998 bombing of the US embassy in Nairobi that resulted in the deaths of 212 people, the highest number to be killed in the country by a single terrorist attack.

In December 2010, terrorists hurled grenades at a Kampala-bound bus as passengers were boarding the vehicle in downtown Nairobi. The explosion killed one person and wounded at least 26 others.

Most of the attacks then, however, seemed to be targeted at a wider international agenda than just hurting the country directly as it appears to be the case currently.

Before the embassy bombing, Kenya’s deadliest attack had been in December 1980 when a bomb exploded outside Norfolk Hotel in Nairobi just before the New Year, killing 20 people and injuring 85 others.

But since Kenya took Al-Shabaab head on in Somalia, the attacks have become more frequent and more widespread by the day, piling in its wake graveyards across the country.

Between December 2011 and March 2012, then Minister for Internal Security, the late Prof George Saitoti, said about 100 terrorist plots had been detected or intercepted in just four months, meaning police were neutralising at least a terrorist attack every two days.

This same chorus has been echoed by the current government, saying it has foiled more attacks than those that have happened so far.

Some of the attacks occurred in just minutes from one another. For instance, in May 2012, an attack at IFO 1 refugee camp in Garissa County and another at a hotel in Wajir town, occurred in less than 10 minutes of the other.

Also in November 2011, grenades were hurled at Holiday Inn hotel and a shop in Garissa, killing three people and injuring at least 27 others in a twin attack.

In September 2012, police seized bomb-making materials at Matuu being transported from Garissa to Nairobi. Police had to arrest the driver, conductor and about 60 passengers on board after they all disowned the luggage.

Both the poor and the rich have borne the brunt of incessant attacks. The cost on the economy, especially on the tourism sector, has been grave from increasing cancelling of events, travel advisories and inconveniencing security checks.

Businesses have also increased spending on security gadgets, with some making budget provisions for insurance against terrorism as well as hiring of new hands for improved surveillance, diverting funds from improving the core business but instead rising the cost of doing business.

Most investigations on terror charges also remain unresolved, with police blaming loopholes on the law and judges for returning suspects on the streets due to weak investigations and inconclusive evidence.

Top security organs have been more reactionary than proactive. Very top security bosses has been sacked or resigned. Instead, the junior offices have borne the greatest responsibility from sackings and transfers.

But the most worrisome trend where the virus of violence seems to be spreading deeper into more Kenyans is radicalising them and arming them to hurt their motherland. Police have on numerous occasions said some of the attacks are believed to be done by Al-Shabaab units made up of Kenyans.

For instance, in October 2011, then Police Commissioner Mathew Iteere said Kenyans recruited by the terror group were responsible for the two attacks that rocked Nairobi on October 24.

This saw the government issue an amnesty to Kenyans recruited by the terror group. But the suspects are yet to take up the state on a reprieve offer issued in October 2011, almost three years later.