Mohamud Uluso — The post transitional Somali leaders elected in 2012 were entrusted with the special duty to lead a full-fledged state of Somalia with its sovereignty, unity, economic recovery, security, and institutional capacity restored and to conduct a free and fair national political election in 2016.
Editorial Keydmedia Online
28 March 2014 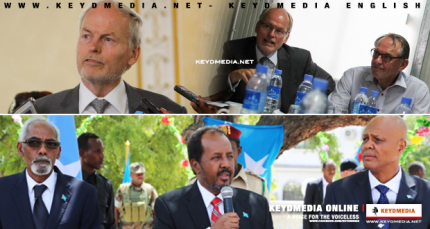 Despite the ongoing armed conflict and social and political fragmentation in the country, many Somalis wanted to believe in the possibility of realizing these clearly remote goals because of new international approach for supporting the failed states like Somalia. The diplomatic recognition of the United States was special a special opportunity to seize it.

However, the fulfillment of statebuilding and political election in 2016 has immediately become an impossible dream for the convergence of at least four factors: 1. The hostile actions of Kenya and Ethiopia to practically deprive the federal government of leadership and relevance role in Somalia; 2. The federal government’s incapacity to own and implement a national coherent policy tailored to the new era of statebuilding, reconciliation, international relations and governance; 3. President Hassan’s inability to shake off the pervasive perception of belonging to or depending on a self-centered group with sinister agenda; 4. The duplicity and empty commitments of the international community of photo-ops and conferences without substantive and timely direct support.

These factors and other events like the violent attacks of Al Shabab on important institutions in Mogadishu, the fallout between President Hassan Sheikh Mohamud and former Prime Minister Abdi Farah Shirdon, the publication of the damning resignation letter of former Governor of the Central Bank of Somalia Madam Yussur Abrar, and frequent fruitless foreign travels, fed negative reports in the international media against the federal government. Reuters and other newspapers published articles accusing the federal government of corruption and internal paralysis. The influential magazine- the Economist described the ongoing AMISOM offensive against Al Shabab as a sideshow and suggested that president Hassan once popular with donors has lost his aura.

Inexplicably, the federal government seems unconcerned about the adverse effects of the unfavorable comments coming from different quarters including from its strongest supporter- the United States. But, the federal government should engage the Somali people with vision, openness, conviction, consistency, and respect of democratic values enshrined in the Provisional Constitution in order to gain respect and confidence both inside and outside.

The negative assessments have emboldened the hands of the representatives of the United Nations (UN), African Union (AU), and Inter-Governmental Authority on Development (IGAD) in Somalia to the point of extorting the sovereignty from the Somali government and imposing arbitrary clan based federation which has inflamed new tensions throughout the country. The extortion of sovereignty occurred when the Special Representative of the UN Secretary General (SRSG) (preferably called UN Administrator) Ambassador Nicolas Kay became the co-chair with President Hassan Sheikh Mohamud at the High Level Partnership Forum (HLPF) on the implementation of the New Deal predicated on the respect of the sovereignty, territorial integrity, and independence of Somalia. HLPF is another layer of super- structure created to confuse the Somali society and institutions. HLPF held in Mogadishu on Feb 24, 2014 was organized by AMISOM, a move itself an anomaly because AMISOM competes to get a lion share of the foreign assistance earmarked to Somalia.

The Speeches of Ambassador Nicolas Kay and President Hassan at HLPF indicate the wide gulf between the two unequal partners. In face of UN extortion, the federal government surrendered cowardly the sovereignty and leadership of Somalia.

According to Press Release signed by the presidential spokesman Eng Yarisow, President Hassan focused on four points:  1. He downplayed the impact of the attack on Villa Somalia and characterized it as an occasional act of terrorism designed to fool others; 2. he touted the progress made  in the past two years; 3. He countered the report of Somalia and Eritrea UN Monitoring Group on the diversion of weapons and ammunitions; 4. finally, he announced the establishment of Financial Governance Committee  and asked the donors to act and deliver the 2.4 billion dollar pledges made at the New Deal conference in Brussels on 16 September 2013.

In contrast, the prepared remarks of the “UN Administrator” Nicolas Kay posted on UNSOM website stressed the following points: 1.  That the federal government runs out of time for the implementation of many key tasks like completing the constitution, forming federal states, and implementing political democratization;  2. That the Federal Government has to act without delay on  the UN report that outlines  the steps needed to take for holding the 2016 election -like the establishment of the election management bodies; 3. That the establishment of the Financial Governance Committee is welcomed but has to be examined later; 4. That Puntland and Jubbaland should be considered as de facto federal states and given a prominent role within the Somali Compact and its bodies; President Uhuru of Kenya and PM Hailemariam Desalegn of Ethiopia welcome the leaders of Puntland and Jubbaland more warmly than President Hassan of Somalia. 5. That the federal government should produce a detailed plan on the stabilization of local administrations before appealing for international assistance.

On March 11, Ambassador Nicolas Kay told the UN Security Council (UNSC) from Mogadishu, “I’m on the ground in Mogadishu and not with you in New York due to the intensity of events at this moment.” President Hassan, Prime Minister Abdiweli Sh Ahmed and other Ministers were abroad for personal profile. Mary Harper, BBC veteran, posted Nicolas Kay’s briefing in her blog with the title “Who runs Somalia? The UN, the Federal Government, or both?”

Somalia needs the international support to achieve political stability and security within its borders, but the present partnership is leading to nowhere. In difference to the usual flow of international aid  from donor to recipient countries, donors allocate and manage the assistance to Somalia. This kind of aid management on behalf of Somalia has created armies of international intermediaries that receive the aid to Somalia. The role of the Federal Government is a rubber stamp in exchange for commissions and allowances. Source informed me that the 40 million dollar assistance announced by the Government of Japan during President Hassan’s visit was transferred to UN months ago.

The strong opposition of AU-IGAD and UN to genuine dialogue among Somali stakeholders on the issue of federalism has set off the chaotic formation of clan based entities with difficulty to challenge their boundaries. In the context of clan competition, the clan claim over land ownership is more important than regional administrative boundaries. The Federal Government cannot play a leading role in the implementation of a hypothetical federal system without legitimate representatives of the national stakeholders reach unassailable consensus on the suitable model of governance and then enacted into law.

The operational policy of Ambassador Nicolas Kay which states, “the UN will continue to back the voices of hope, not despair, of opportunity, not crisis” has been translated into “ignore and marginalize the opinion and voice of the majority of the people and empower villain politicians and groups.” In his briefing to the UNSC on March 11, Ambassador Nicolas Kay said that the gulf between the six and three regions state rival camps remains wide but the UN supports the three groups while at the same time calling for dialogue.  UN calls the shot and  plants the causes for division and grievances.

UN and AU-IGAD cannot hide behind a dodgy federal government; and the abusive show of their envoys in reaction to the popular election of President Madobe Nuunow of the Southwestern State composed of six regions, headquartered in Baidoa has been responded courageously and unanimously  by the majority of Digil and Mirifle community.

AU-IGAD and UN were not ashamed by forcing the recognition of the unilateral and self-anointed leadership of militia leader Ahmed Madobe while ferociously attacking and refusing to recognize the leadership of the moderate politician Madobe Nuunow. This is blatant discriminatory approach. It is unfortunate to take note that the umpires over the dispute between the Southwestern and Jubbaland States are Ambassador Mohamed Abdi Afey and Eng Mahboub Maalim both of Somali Kenyan nationals who are Envoy and Executive Secretary of IGAD respectively.  The subtexts of this spectacle have fed gossip among Somalis.

The Somali people have endured long struggle for justice, freedom, unity, democracy, and progress. But the achievement of those noble goals has remained elusive due in major part to the performance of Somali leaders and Elite serving their personal ego and foreign interests rather than being focused on their historic responsibility for the common welfare, long term interests, and cohesion of their society crippled by self-destructive clan rivalries. US President Harry S. Truman once said, ““Men make history, and not the other way around. In periods where there is no leadership, society stands still. Progress occurs when courageous, skillful leaders seize the opportunity to change things for the better.” The change for success is in hands of  Somali Elite and people.