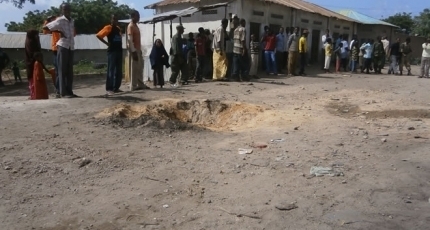 BAL’AD, Somalia – At least six people were killed and ten others wounded in an enormous explosion in southern Somalia on Monday, authorities, and witnesses said.

The blast resulted from a remote-controlled landmine at a small but busy tea shop in the Qalimow area which is frequented by local security force members and residents.

The entire café was razed to the ground and the bodies of the victims were blown to pieces as result of the bomb blast,” Ahmed added.

The wounded have been taken to a hospital in a nearby Jowhar, the regional capital of Middle Shabelle, which lies 90 kilometers north of the Somali capital, Mogadishu.

There was no immediate claim of responsibility for the deadly attack, however, such incidents bore the hallmark of Al-Qaeda’s East Africa ally, Al-Shabaab in Somalia.

HirShabelle state still remained silent on the blast in Qalimow between Bal'ad and Jowhar, along the main highway linking to Mogadishu, where several MPs were killed by Al-Shabaab.