Djibouti (KON) - The legal case of a former CIA detainee suing the government of Djibouti for hosting the facility where he says he was detained could be helped by the contents of a still-classified Senate report.
Editorial Keydmedia Online
3 May 2014 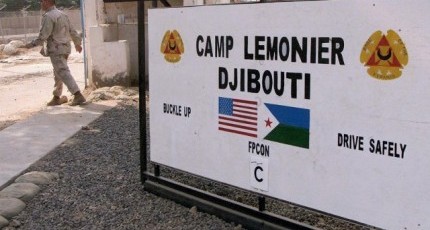 Djibouti, a key U.S. ally, has denied for years that its territory has been used to keep suspected Al-Qaeda operatives in secret captivity. But the Senate investigation into the agency’s “detention and interrogation program” concluded that several people had been secretly detained in the tiny Horn of Africa state, two U.S. officials who read an early draft of the report told Al Jazeera.

Official confirmation of Djibouti’s role in hosting “black sites” used in the CIA’s rendition program would be welcomed by Mohammad al-Asad, a Yemeni arrested at his home in Tanzania on Dec. 27, 2003, blindfolded and flown to a location he insists was Djibouti. Two U.S. officials who read an early draft of the report of the Senate Intelligence Committee’s investigation — and who requested anonymity because the report remains classified — were unaware of whether al-Asad’s case was specifically cited in the document. But they confirmed that the report found that several detainees had been held in Djibouti, and that at least two of them had been wrongfully detained.

Djibouti's Ambassador to the U.S., Roble Olhaye, told Al Jazeera his country was not a "knowing participant" in the CIA's rendition program and he rejected claims by al-Asad that he was temporarily imprisoned there.

However, Olhaye said, "If something was done in the context of the American base there how would we know?" But, he said, Djibouti's agreement with the U.S. precluded the base from being used to house prisoners.

Al-Asad said that after his arrival in the country he alleges was Djibouti, he was held in a prison cell and tortured. He said he was interrogated by an American woman about his connections to the now-defunct Saudi charity Al-Haramain. The group, later accused by the U.S. Treasury of supporting terrorism, had in 1994 rented apartment space from al-Asad in a building he owned in Tanzania.

In an exclusive interview with Al Jazeera, al-Asad, now 54 years old, said he was detained for about two weeks in Djibouti and then rendered to Afghanistan, where he says he was tortured at various points over the course of more than a year at several CIA black site prisons.

Before he was released in 2005 and sent back to Yemen, he said, he received a visitor from Washington.

“What I remember through the interpreter was that he said, ‘I am the head of the prison, and you will be the first one at the top of the list of the people we are going to release because we have nothing on you,’” al-Asad told Al Jazeera. “The interpreter said that he was the director of all the prisons.”

Al-Asad was never charged with terrorism or related crimes, but he pleaded guilty in Yemen to making false statements and using forged documents to obtain his Tanzanian travel papers.

Al-Asad, who still lives in Yemen, has been trying since his release to hold Djibouti officials accountable for his detention. In 2009, he sought redress from the African Commission on Human and Peoples’ Rights, a quasi-judicial body that has jurisdiction over Djibouti and other countries that approved the African Charter on Human and Peoples’ Rights. In the coming days, that commission, which is based in Gambia, is expected to decide whether it will take up al-Asad’s case.

Olhaye called al-Asad a "liar", adding, "Everything about his case relies on hearsay and conjecture. There were no flights that came to Djibouti on that day he said he was brought to my country from Tanzania. That was checked by our lawyers."

But John Sifton, the Asia advocacy director at Human Rights Watch, who has spent more than a decade investigating the CIA's rendition, detention and interrogation program testified before the commission last year and said "the fact that the flight records of CIA aircraft that are public do not include a flight that matches Mr. al-Asad's trajectory is not indicative of anything in and of itself."

Sifton said the CIA could "easily circumvent data collection" and "aircraft used by the CIA could easily be rendered untraceable while flying in and around Djibouti."

Al-Asad has based his legal case on flight records, collected by Human Rights Watch and the U.K.-based human rights charity Reprieve, demonstrating CIA-linked aircraft flying in and out of Djibouti (PDF).

His lawyers have also obtained documents from Tanzanian immigration officials stating that al-Asad was sent to Djibouti on a Tanzanair aircraft after his 2003 arrest.

“This is one of the most direct pieces of evidence we have showing that Djibouti is where our client was held before being handed to the rendition team on the tarmac,” said Margaret Satterthwaite, al-Asad’s attorney and a professor at New York University’s Global Justice Clinic.

If the case proceeds, it will mark the first such investigation into the workings of the rendition program in Africa, and could open the door to additional legal challenges by former “war on terror” captives.

A handful of similar cases are already pending before the European Court of Human Rights. However, U.S. courts — citing state secrecy — have rejected attempts by detainees to hold their former captors accountable.

Al Jazeera’s sources noted that in addition to 6 million pages of CIA records, Senate committee investigators obtained some information about the wrongful detentions from people they characterized as “whistleblowers.” The U.S. officials declined to elaborate.

Djibouti, a former French colony, has been one of the key U.S. counterterrorism partners for more than a decade, hosting the Combined Joint Task Force–Horn of Africa at Camp Lemonnier. The U.S. Air Force also reportedly uses Djibouti as a base for a fleet of drones to strike at Al-Qaeda and Al-Shabab suspects in Yemen and Somalia.

According to human rights researchers, after 9/11 dozens of suspects captured by the U.S. were secretly detained, interrogated and tortured in Djibouti.

The Obama administration, as recently as August 2012, reportedly continued to render suspects to Djibouti for short-term detention. Although President Barack Obama signed an executive order in 2009 banning the CIA’s use of black-site prisons, the order states that it does “not apply to facilities used only to hold people on a short-term, transitory basis.”

Confirmation by the Senate Intelligence Committee of Djibouti’s role in the rendition program would be a “critical” development, said Satterthwaite.

“The cooperation of countries all over the world — including Djibouti — was central to the operation of the U.S. rendition, secret detention, and torture program,” Satterthwaite said. “While the role of European partners such as Poland and Romania has been the subject of much reporting and investigation, the assistance of countries such as Djibouti has yet to be scrutinized. Further, as the home of a fleet of U.S. drones, Djibouti is an enormously important partner but has not received adequate scrutiny for its role in facilitating U.S. abuses.”

Jonathan Horowitz, who works on national security and legal issues at the Open Society Justice Initiative, said al-Asad’s case provides the African human rights commission with an opportunity “to state that African governments can’t collude with other governments to abuse human rights, and they can’t use the fight against terrorism to justify violating people’s rights.”

“One of the things that is really important to recognize here is that the CIA torture and rendition program couldn’t have gone global without the assistance from other countries,” Horowitz said.

Meanwhile, the U.S. continues to work on strengthening its counterterrorism relationship with Djibouti. Next week, Djibouti’s president, Ismaïl Omar Guelleh, will travel to the U.S. to meet with President Obama at the White House. Ambassador Olhaye does not believe the Senate's report, if it is ever released, will identify his country as a rendition partner.

"I don't believe the Senate report will say anything about my government," he said. "Maybe about the American base. Our prisons have not been participating in that kind of thing." Olhaye said neither he nor anyone from his country has had any discussions with U.S. officials about the Senate's report.