AU, IGAD should push for credible polls to avert civil war in Somalia

In the wake of the Dhusamareb Conference in September, President Farmajo and five regional leaders agreed on a revised election procedure based on the 2016 Somali parliamentary election. 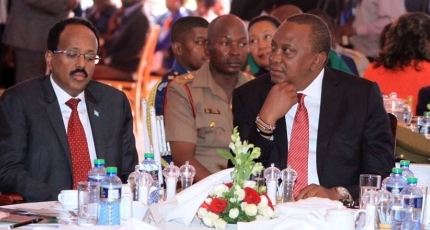 Somalia is facing its worst electoral gridlock in history. The term of President Mohamed Abdullahi “Farmajo” is due to expire on February 8, 2021.

In June 2020, Somalia’s National Independent Electoral Commission declared it could not hold the long-awaited direct elections of parliamentarians to elect the president, citing lack of funding and infrastructure.

In the wake of the Dhusamareb Conference in September, President Farmajo and five regional leaders agreed on a revised election procedure based on the 2016 Somali parliamentary election.

Lack of consensus on appointment of electoral committees has put Mogadishu and the opposition at odds. The opposition has accused Farmajo and the National Intelligence (NISA) of packing committees with handpicked ‘youths’ to rig the parliamentary and presidential elections.
Pre-election Somalia signifies the rise of a new crop of tyrants using the outbreak of Covid-19 as a subterfuge to freeze democracy indefinitely.

In 2021, Farmajo is counting on his recent controversial victories in federal states to retain power in Mogadishu. First is Abdiaziz Hassan Mohamed (“Laftagareen”), president of the South West regional State since December 19, 2018, who has close ties to Farmajo’s party, Nabad & Nolol (Peace &Life).

Ominously, 90 per cent of Somalis fret that al-Shabaab has infiltrated the federal government and its security agencies.

Farmajo’s election committees are feared to have links to al-Shabaab, which has reportedly been pushing community elders to support pro-government electoral committees.

The new face of Somalia’s opposition is a new Council of Presidential Candidates (CPC). In November 2021, a group of 14 presidential candidates met in Mogadishu for a six-day conference and formed the CPC. They nominated former president Sharif Sheikh Ahmed as their chairman.

Mr Ahmed had announced his candidacy for the election in January 2019, citing the “inability of the current leadership to restore peace and security" against al-Shabaab.

The Hawiye, one of Somalia’s ‘big four’ clans, are top contenders for power in Villa Somalia. On January 5, 2021, more than 1,000 members of the clan, which forms an estimated 38 per cent of the Somali population, met in Mogadishu and called for timely elections, the establishment of Banadir as a regional state and the resolution of the deadlock between states and Villa Somalia.

Potential kingmakers
The Hawiye are silently eyeing Yusuf Mohammed Siad Indhacade, nicknamed "Inda'ade" (White Eyes) for help if Farmajo uses violence to deny them power. An Islamist, former governor of Lower Shabelle (2002), general in the Somali National Army (2011) and former Defence minister (2009-2010), Yusuf hails from the Ayr sub-clan, part of the Habar Gidir, a branch of the Hawiye.

Farmajo has fallen out with key Darod leaders, mainly presidents Ahmed Madobe of Jubaland and Said Abdullahi Dani of Puntland, who are leading candidates and potential kingmakers in the 2021 election.

On the sidelines of a meeting organised by the Heritage Institute in Garowe, Puntland, on January 2, 2021, Madobe and Dani gave three conditions to Farmajo on elections: to dismantle the skewed election committees, withdraw troops from Gedo region and let communities choose their own leaders.

The third fault-line is selection of electoral committee members for the breakaway federal state of Somaliland, who will elect 58 MPs for both houses.

The crisis came to a head on November 13, 2020. Senate speaker Abdi Hashi, from Somaliland, wrote to the African Union and the United Nations to intervene and break the impasse.

He wants the committee picked through an all-inclusive consensus-based formula.

The civil war in Ethiopia’s Tigray region also casts a long shadow over the conflict between Farmajo and Madobe.

Eritrea, which reportedly aided Addis Ababa’s war efforts in Tigray, has trained 5,000 of Farmajo’s soldiers, some of who have been dispatched to Gedo in what appears like Villa Somalia’s determination to use force to assert its power over the region.

If no election of the president takes place on February 8, it is likely the opposition will announce a caretaker president, pushing Somalia to the brink. Igad, AU and the international community need to put pressure on the government to hold credible and transparent election to avert Somalia’s slide to civil war.