Galmudug leader, Ahmed Abdi Karie alias "Qoor-Qoor' and delegates led by him have reached Adado, Central Somalia — a day after marking the Eid celebration in the state capital of Dhusamareb. 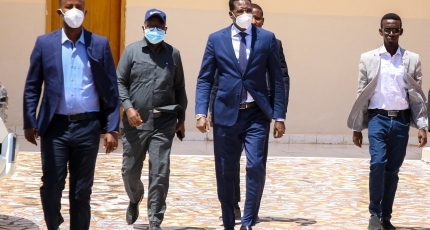 Adado, Somalia - Upon his arrival in the capital city of Galguduud region of Galmudug state, Karie was received by the people of Adado at large including the elders alongside the administration.

The trip he headed all the way from Dhusamareb to Adado is part of the cessation of the hostilities that recently emerged in Galmudug as he is expected to make his way to Galkacyo as well in the process.

Karie is also due to participate in the election conference under the 17 Sep Agreement announced by the acting PM, Mohamed Hussein Rooble that will be taking place in Mogadishu on May 20.

Galmudug leader has abandoned his state duty, according to critics giving little appreciation to sustain his position in serving the administration as he was in the capital for 45 days.