Opposition troops driven out of the capital following an agreement

The soldiers who seized key areas in the vicinity of the statehouse in Mogadishu during last week clashes with pro-government troops has departed from the capital as part of the agreement reached by the resolution committee nominated by the acting Somali PM. 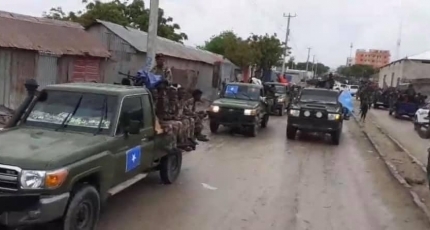 MOGADISHU, Somalia - The defected troops who rejected the extension term regulated by the acting Parliament, Mohamed Mursal for the outgoing leader, Mohamed Abdullahi Farmaajo have returned to their bases Friday morning.

The withdrawal of theses troops have met with welcoming gestures from citizens in Mogadishu.

Heavily armed troops and convoys, however, who maintained large presences with crossfires in the Somali capital have eventually retreated to their bases heading to the Lower Shabelle region whom they previously pervaded.

Lawmakers from the two Houses, military officers, political figures and elders participated in the farewell departure of the troops who called themselves the National Salvation Army and  commended the troops for their brave stances.

Major Gen. Ali Araye alias (Ga’ma-dulle) who was the outstanding and the leading figure of the withdrew army from Mogadishu said that he and the acting PM Rooble discussed to resolve the political standoff and ensure the rights and the needs of the troops to be met.

He vowed to make a comeback if certain group tries to fraud the upcoming elections demanding to take place within two months.

The troops made their way into the capital on 25 April last month claiming they had to engage in to save the country from falling into hands of cynical dictator.

A 10-point pact was reached during a meeting on Wednesday afternoon by the technical committee appointed by Roble on Tuesday with the attendance of ex-presidents, candidates, and two regional leaders.

Among the points in the deal include that the rights of the forces, such as their salaries and ranks should not be suspended and face no punishment as a result of their role in the violence in Mogadishu.