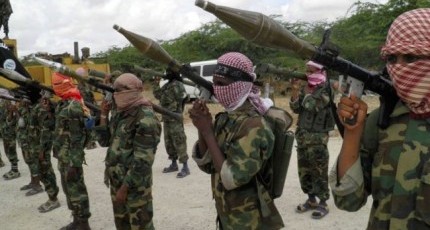 The AU troops eventually stopped the attack and secured the area, said Ali, who added he didn't have any information about casualties.

The troops have a base in Burdhubo, which used to be held by Al-Shabaab. Somali and AU forces captured the town, about 250 miles (400 kilometers) south of the Somali capital of Mogadishu, in March.

A Burdhubo resident said he could hear Saturday's clashes from the town.

"We are hearing heavy fighting and shelling," resident Ali Mohamed said before the clashes ended.

Intelligence reports indicated the group is planning attacks in Somalia, according to Mohamed Yusuf, a spokesman for the security ministry.

The U.S. military said it killed Godane in a thunderous attack Monday.

"Removing Godane from the battlefield is a major symbolic and operational loss to Al-Shabaab," said Rear Adm. John Kirby, a Pentagon press secretary.

U.S. officials were tipped off to what Kirby called "actionable intelligence ... strong enough" to suggest his whereabouts.

Godane had been at the helm since the group started a campaign of terror in East Africa, killing Somali officials, aid workers and others in a spate of suicide bombings.

Commandos flew in Monday and took the leader out with the help of drones and laser-guided missiles, Kirby said.

"I never heard such a huge and deafening blast," he said.

Al-Shabaab's Twitter account said one person was killed in the attack but asserted it wasn't the terror leader.

"'Ahmed Abdi Godane' is alive and doing fine," it said.

CNN could not verify the authenticity of that claim.

The man behind Al-Shabaab

Godane, who was also known as Mukhtar Abu Zubayr, became the leader of the militant group in 2008.

The group started off with a goal of waging a war against the Somali government in an effort to implement a stricter form of Islamic law, or sharia.

But it has shifted focus to terrorist attacks beyond Somalia. It has targeted East African states supporting the Somali government, especially Uganda and Kenya.

A year ago, militants raided a mall in the Kenyan capital of Nairobi in an audacious siege that lasted days and left 67 people dead.

The attack wasn't the group's first strike outside Somalia.

In 2010, it carried out suicide bombings in the Ugandan capital, Kampala, killing more than 70 people.

Under Godane, the terror group became a formal ally of al Qaeda.