Nairobi (AFP) - The US missiles that smashed into Somalia's Islamist chief this week ended the life of the one of the world's most wanted men, but not the danger of his Shebab insurgents, analysts warn.
News Keydmedia Online
6 September 2014 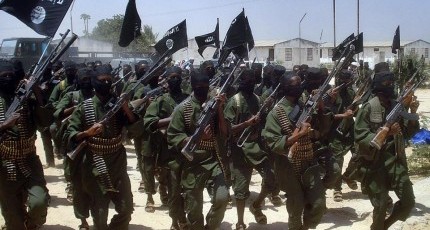 Ahmed Abdi Godane, declared dead by the United States after an air strike earlier this week, was a ruthless kingpin of Al-Qaeda's main African affiliate.

As he had purged potential rivals, there is no clear leader for the fighters, although the Shebab have survived before: Godane himself took power after the last Shebab chief was also slain in a US missile strike in 2008.

"Removing him will significantly weaken the Shebab, at least in the short term," said Cedric Barnes of the International Crisis Group.

But his death could be pivotal in the direction the Shebab now take: the group could swing back to being focussed on Somalia and mired down in the country's complex clan rivalries, or, as Godane tried to push, as insurgents pursuing a wider jihadist agenda by staging attacks across the region.

Will McCants, Director of Brookings Project on US Relations with the Islamic World, said Godane's death was a "very big deal", branding him a "ruthless killer" who merged Shebab with Al-Qaeda.

With the whine of drones a common sound in southern Somalia, Godane must have been all too aware of his possible sudden death, but it is unclear if he had tapped a successor.

"The irony is that Godane killed his would-be obvious successor in a major internal rift last year," Aynte added.

"Without Godane as its leader... it is difficult to imagine Al-Shebab remaining a cohesive entity. He made no obvious attempts to groom a successor."

The Shebab have not commented on who will replace Godane -- let alone even confirm his death -- but analysts and intelligence sources say potential successors include the man thought to be Godane's nominal deputy, Mahad Diriye, and the head of the group's feared internal security wing, Mahad Mohamed Ali, also known as Karate.

Another, known as Ikrima -- believed to have been a key plotter in the Shebab's attack on Kenya's Westgate mall last September, and who US special forces reportedly tried to capture in a raid on southern Somalia last year -- remains at large.

Another influential Islamist, Muktar Robow, also remains powerful -- but he was believed to have split from Godane's wing.

It is also unclear who else was killed in the US air strike, which is believed to have killed six or seven Shebab figures.

Shebab foot soldiers, often economic conscripts and not committed idealogues, could be tempted by a government amnesty, while a hardcore elite -- including skilled foreign fighters -- may intensify attacks to show off the group is still there.

"I suspect many of Godane's lieutenants already had plans of their own... My estimate would be the most hard core of Godane's adherents will break off and form a particularly violent element of Al-Shebab," Watts said.

According to estimates by intelligence sources and analysts, the Shebab are believed to have anywhere between 5,000 and 9,000 fighters, but it is unclear how many of these are part of a hardcore cadre and how many are linked with individual warlords who are nominally affiliated to the group.

Shebab commandos carried out the four-day seige in the Kenyan capital's Westgate mall last September, slaughtering at least 67 people, as well as bomb attacks in Uganda and Djibouti.

A Western security source said that while the death of Godane was a "step forward" in terms of defeat of the Shebab, it also "opens up a wide door of what it will do next."

Shebab gunmen are expected to retreat in face of AU assaults in Somalia, but attacks elsewhere may be more deadly.

In the face of a renewed push in the 22,000-strong African Union force's seven-year military campaign against the Shebab, few expect fighters to soon hold any major towns.

But with vast rural regions still under the sway of Shebab, many fear the fighters will use the lawless zones to plot large scale attacks across the region.

"With Godane dead, Al-Shebab's deadly external operations forces might be looking to either retaliate, relocate or both," Watts said.

"I suspect they will either wreak havoc by accelerating operations they already have in motion, or will rapidly move to a new battlefield and affiliate if they believe their Somalia safe haven is compromised."

Watts said the key question was "Will Shebab's new leader swear allegiance to Zawahiri and 'Old Guard Al-Qaeda, to abu Bakr al-Baghdadi and ISIS, or will he pursue an independent track for Shebab in Somalia independent of today’s jihadi politics?"