US Navy rescues 15 crew from sinking cargo ship off Somalia

A still stranded ship that experienced engine failure in the Gulf of Aden has been rescued by US Navy off the coast of Somalia. 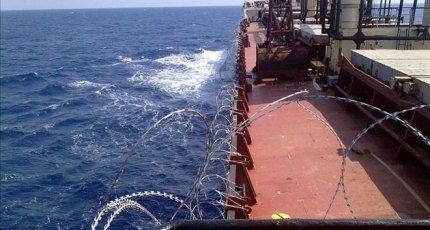 MOGADISHU - The US Navy on Wednesday said that its team rescued 15 crew members from a sinking cargo ship off the coast of Somalia.

A watch center of the UK Maritime Trade Operations informed the US Navy about a motor vessel, Falcon Line, that experienced engine failure in the Gulf of Aden, said a statement.

"Upon notification of the situation, Patuxent proceeded at maximum speed to rescue the crew of Falcon Line before the ship completely sank," the statement added.

The recovered crew members were provided with food, water, and medical screening, the statement added.

The US 5th Fleet stated that it is currently coordinating with the owner of Falcon Line and other authorities to determine the best location for the crew members to disembark.

Falcon Line is a general cargo ship registered in Gabon, according to Somali local media reports.