Somali ambassador to Turkey, Jama Abdullahi Mohamed, presented his credentials to the Azerbaijani President, H.E. Ilham Aliyev, on June 12 as a non-resident ambassador. 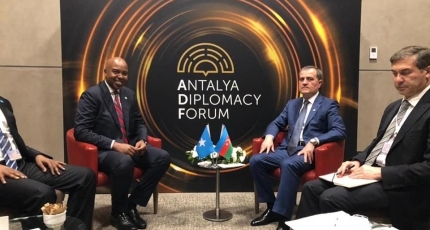 ANTALYA, Turkey - Somalia has established new diplomatic relations with Azerbaijan, a country that Tukey has supported mindlessly during the 2020 war with neighboring Armenia.

On Friday, Somalia's minister of foreign affairs Mohamed Abdirisaz has held bilateral talks with his Azerbaijani counterpart, Jeyhun Bayramov on the sidelines of the two-day Antalya Diplomatic Forum kicked off under the theme of “Innovative Diplomacy: New Era, New Approaches”.

The two top ministers have discussed ways to strengthen the bilateral relations and cooperation in several areas of mutual benefit between the two brotherly countries and peoples.

In a statement, the ministry of foreign affairs said a new era has begun in the relations between Somalia and Azerbaijan, as the Somali ambassador, Jama Abdullahi Mohamed, presented his credentials to the Azerbaijani President, Ilham Aliyev, on June 12, as a non-resident ambassador.

The move which is brokered by the Turkish government is aimed at consolidating the historical ties between the two countries which are close allies of Ankara, a key NATO member state facing pressure from the U.S.