The perpetrator reportedly stabbed passers-by indiscriminately and without warning in the city center. Police say a motive is still unclear. 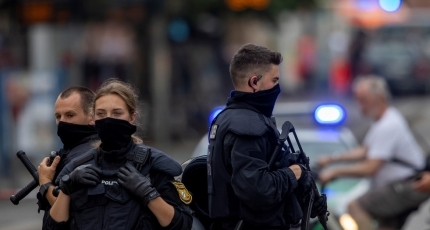 Wuerzburg - A man armed with a long knife killed three people and seriously injured five others in an attack in the southern German city of Wuerzburg on Friday, authorities said.

Police stopped and arrested the attacker by firing a bullet through his thigh. They said his injuries were not life-threatening.

“As things stand, three are dead and five very seriously injured,” Bavarian Interior Minister Joachim Herrmann said after arriving on the scene. “With the most seriously injured we are not sure they will survive.”

Police said there was no indication that there were any other attackers, and that the situation was now under control. They did not give details on the suspect’s motives.

The suspected perpetrator is a 24-year old Somalian man who lives in Würzburg, police said on Twitter. He has lived in Würzburg since 2015 and was receiving psychiatric care, according to the Police.

Police spokeswoman Kerstin Kunick said officers were alerted around 5pm (15:00 GMT) to a knife attack on Barbarossa Square in the centre of the city.

Videos posted on social media showed a young man seemingly holding a knife being warded off by other men holding chairs until police arrived. Another video appeared to show blood on the ground.

Bavaria’s governor Markus Soeder expressed shock at the news of the attack. “We grieve with the victims and their families,” he wrote on Twitter.

Wuerzburg is a city of about 130,000 people located between Munich and Frankfurt.