Abdi Hashi is a legendary and outstanding figure among the northern politicians serving for two decades in the system of governance. 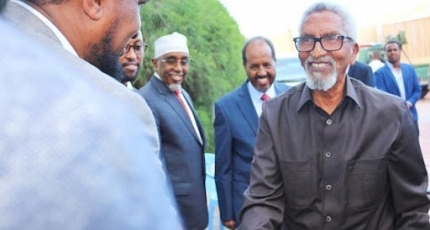 MOGADISHU, Somalia - There was an ongoing effort that Abdi Hashi, the Chairman of the Upper House Senate is being persuaded to participate in the closing ceremony of the election conference after denouncing to attend.

The effort is being spearheaded by ex-President Hassan Sheikh, Said Deni, and members of opposition candidates to see himself in the ceremony will be kicked off just in a matter of time.

That attempt has finally paid off with the Chairman now reported to have accepted the invitation to attend the ceremony.

Hashi has met with a hit back from Mahdi Guled who is backed by Farmaajo since he was handed over the process of the parliamentary election of Somaliland lawmakers to him causing a big controversy among the northerners’ politicians.

The caretaker PM, Mohamed Hussein Rooble has made everything possible to help sides set their differences aside in order for the country to go elections but ended in vain with the political stakeholders still doubting where they fit in the process.

Abdi Hashi is a legendary and outstanding figure among the northern politicians serving for two decades in the system of governance.