The Southwest State has eventually applauded the need to return to the talks under the agreement of 17 Sep 2020. 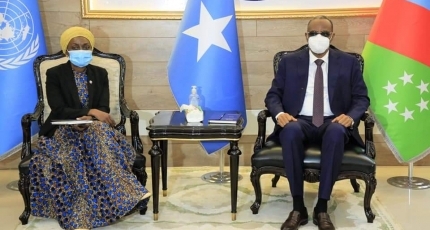 BAIDOA, Somalia - The Southwest State leader, Abdiaziz Hassan Mohamed [Lafta-gareen] has received the Deputy Special Representative of UN for Somalia alongside EU and AU Envoys in his office in Baidoa city on Tuesday.

They discussed the sustainability of the cooperation between the state and the UN and EU as well as the upcoming conference between the Somali government and regional states which is slated for 20th May in the capital Mogadishu.

The outgoing President, Mohamed Abdullahi Farmajo has disowned his two-year illegal extension after facing pressures from within and the international community, leading the Lower House chamber of parliament to revive Sep 17 deal for indirect elections in Somalia.

Lafta-gareen, a former minister has come to power in December 2018 after winning an election marred by vote-buying and irregularities followed by bloody clashes in Baidoa between pro-former Al-Shabaab deputy leader turned a regional candidate and security forces in Baidoa.

Ethiopian forces have involved in the bloodshed who also arrested Mukhar Robow acting on Villa Somalia instructions in an attempt to allow Lafta-gareen win the election.