Weather experts forecast unprecedented fourth consecutive below-average rains during the long rainy season of April to June across most of the country. 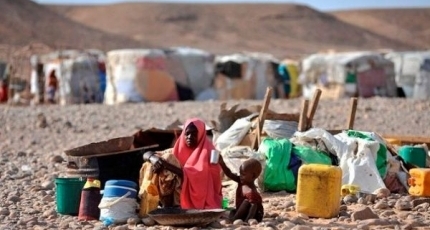 A mother and her son in Somalia, 2022. | Photo: Twitter/ @NaughtyNought

MOGADISHU, Somalia -- More than 60 aid agencies operating in Somalia on Wednesday appealed to the international community to work to avert a possible famine in Somalia in 2022 due to worsening drought conditions.

The country directors of aid agencies including World Vision, Save The Children, Norwegian Refugee Council and ActionAid said in a joint letter to the UN Secretary-General Antonio Guterres that the humanitarian situation is deteriorating rapidly with about 4.5 million people in need of urgent assistance.

We request you to urge donors and the Member States to commit additional resources to enable immediate scale-up of humanitarian response in Somalia to avert a possible famine and save lives,' the agencies said in their letter.

They warned that more than 1.4 million children, nearly half of the country's under-five population, are likely to suffer from acute malnutrition with 329,500 of them likely to be severely malnourished.

What we are now seeing is an impending famine similar to that which occurred in 2010/2011 in which more than a quarter of 1 million people died -- including 133,000 children under the age of five,' the agencies said.

The agencies said although some donors have committed to funding Somalia's Humanitarian Response Plan (HRP) which seeks 1.5 billion U.S. dollars, not even 4 percent of the funding required to meet Somalia's humanitarian needs has been allocated.

The organizations said there are already an estimated 2.9 million internally displaced persons in Somalia and total drought displacement may reach 1.4 million by mid-2022 if no emergency aid is delivered.

Weather experts forecast unprecedented fourth consecutive below-average rains during the long rainy season of April to June across most of the country.

They said the current drought is a regional crisis and has affected countries in the Horn of Africa, but the Somali people are facing the brunt of it, with increasing numbers of people crossing to neighboring countries.

We are running out of time. It is time to keep the promise of 'never again' that was made during the 2017 drought when the immediate action of the humanitarian community led to lives being saved. The window to avert a famine is closing fast. If we don't want to see history repeating itself, we cannot delay action any longer,' the agencies said.