Al-Shabaab attacks AMISOM base in Somalia

The al-Shabaab terrorist group attacked a base of the African Union Mission in Somalia (AMISOM) late Thursday, according to officials. 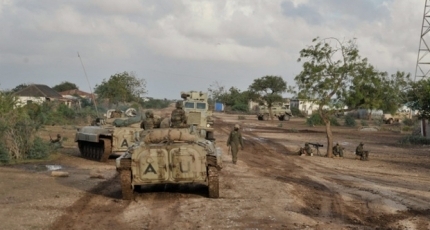 MOGADISHU, Somalia - The attack was on the AMISOM base Bulomarer, located 123 kilometers (76 miles) south of the capital of Mogadishu.

"The terrorists first attacked a security checkpoint in the town, but the military swiftly repulsed the attack. After they failed, the attackers then fired mortars at the AMISOM base, and it's possible that some shells landed inside the base," a military officer in the Lower Shabelle region told Anadolu Agency, without disclosing whether there were casualties.

The group, which is linked to al-Qaeda, claimed responsibility for the attack, saying 17 peacekeepers were killed or wounded.

The group also said it killed five soldiers in the attack on the security checkpoint in Bulomarer.

Al-Shabaab claimed that it killed four peacekeepers Saturday in a bomb attack in the Middle Shabelle region.

In October 2017, at least 300 people were killed in a truck bomb attack in Mogadishu blamed on al-Shabaab -- the deadliest terror attack in Somalia’s history.