The attack came hours after the army chief General Odowa Yusuf Rage arrived in the central town for a troop visit. 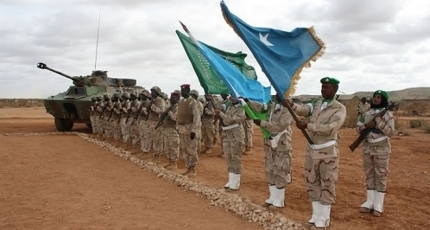 MOGADISHU, Somalia - Al-Shabaab said it has carried out a mortar attack against Somali and African Union military base in Bula-burte district the central Hiran region on Sunday evening.

Local residents have told Keymedia English that the Djiboutian forces serving under AMISOM have responded with artillery fire to Al-Shabaab's attack from the outskirts of the town.

Al-Shabaab said the target of the assault was to kill the army commander who arrived in the town on Sunday to accelerate the military operations to liberate the region from the terrorists.

Somali military is yet to comment on the shelling that comes amid intensified offensive in parts of south and central Somalia by the country's armed forces and their allied AU troops.

The aim of the operations is to secure the country ahead of the elections and avert Al-Shabaab from making territorial gains and attack the government-controlled towns, where the polls are set to kick off this month.

Hundreds of militants were killed in an ongoing battle in the Middle Shabelle region near the capital between the Somali army and Al-Shabaab, the biggest offensive in the country since Farmajo's 4-year-term as Somali president ended on Feb 8.