Al-Shabaab militants killed in a ground and air offensive

This is the deadliest offensive against Al-Shabaab as the group loses ground to Somali forces in the south and central regions. 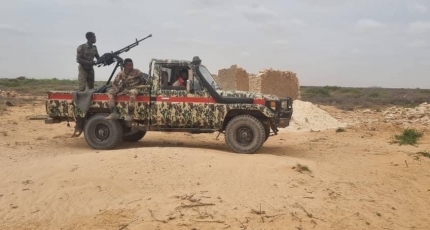 MOGADISHU, Somalia -  A top military official says at least 62 Al-Shabaab members were killed and many more wounded in a ground and air attack in central town on Tuesday.

The official who asked not to be named told Keydmedia Online that 62 militants have died in a U.S. airstrike targeted Al-Shabaab convoy in the vicinity of Amara village.

The U.S. Africa command released a statement on Tuesday evening confirmed the air raid but didn't announce the number of extremists killed in the self-defense strike against Al-Shabaab.

AFRICOM said the airstrike came after Al-Shabaab fighters engaged in fierce combat with the Somali partner forces in the southern Mudug region early in the morning.

"62 Alshabab were killed in a ground battle and airstrike conducted by Somali National Army and its international security partners on Tuesday," Somali state media reported.

Al-Shabaab attacked an army base near Amara using a car bomb detonated at the gate but the troops repulsed the militants. The group has claimed it has seized 14 military vehicles.

Several Somali soldiers died in the base attack, which sparked public anger in Galkayo, where hundreds of people and regional officials held an anti-Al-Shabaab protest on Wednesday.