The group is affiliated with al-Qaeda and has been fighting the Somalian government since 2007. 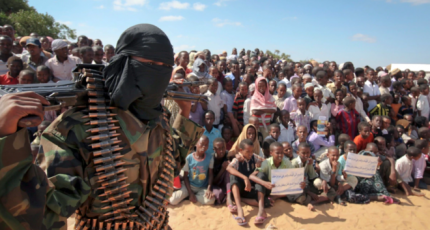 MOGADISHU, Somalia - Al-Shabaab announced it has publicly executed a woman in central Somalia on Tuesday afternoon, in a rare execution by the group, which is under pressure.

Anfac Hussein Mohamud, a woman in her 30s was blindfolded and with her hands tied up behind her back before being shot dead by a firing squad at an open square in Sham locality on Tuesday.

The woman has been convicted of being a HirShabelle state soldier stationed at Lama-Galay base in Beledweyne city, according to the Al-Shabaab court which handed down the sentence.

Often, Al-Shabaab courts operating in the south and central Somalia do not allow lawyers to represent the defendants, and the evidence largely relies on forceful confessions.

Hundreds of residents, including women and children, were ordered to watch the dreadful execution of the woman in the Sham area, where a top court judge with the group announced they will kill everyone found working with government forces or western intelligence.

In July 2021, the terrorist group executed more than 50 people in different areas in southern Somalia, accusing them of being informants for the U.S, and Somali intelligence agencies.

The mass execution was in response to the murder of 21 alleged militants in Puntland in July who have been accused of being behind attacks and assassinations carried out since 2008.