Last month, Biden approved a Patnagaton request to redeploy the US troops to Somalia to help local and AU forces in the fight against Al-Shabaab. 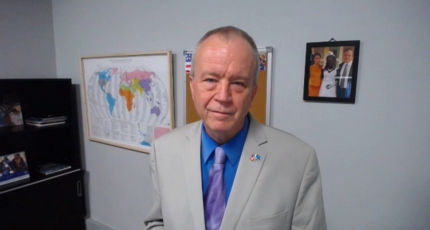 MOGADISHU, Somalia - Despite Al-Shabaab gains on the ground, the US ambassador to Somalia Larry Andre told the UK's Channel 4 the ousting of the elected government in Mogadishu by the Al-Qaeda-linked terrorist group will not happen.

The Ambassador who is based in Mogadishu's most secured Halane base camp said that Al-Shabaab will not be able to take over Somalia, just as the Taliban seized power in Afghanistan in 2021.

Responding to a question about Jamal Osman's interview with Al-Shabaab's deputy leader, Mahad Karate, who said they are prepared to take control of Somalia, described it as "exaggerated".

Karate said Al-Shabaab would not negotiate with the Somali government, as the group did not believe in democracy. He vowed they will continue the insurgency until capturing the country.

The ambassador said Al-Shabaab has wreaked havoc in Somalia and is still in control of large swathes of the territory and extorts the businesses in the Somali capital Mogadishu through threats.

He said Somalia has security partners, including the United States, Turkey, the African Union, and neighboring countries, who he said are ready to defend Somalia against any threat from Alshabab.

The US ambassador also said that Somalia has troops capable of defending against Al Shabaab, noting that they are still conducting operations against Al Shabaab and preparing the take over the security responsibility from AU troops set to exit by 2024.