Amid crisis at home, Farmajo to make trip to Ethiopia 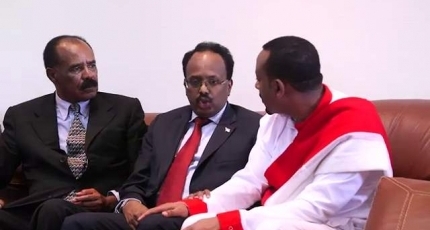 MOGADISHU, Somalia - Four years into a turbulent term and political chaos, outgoing President Farmajo is embarking on a trip to neighboring Ethiopia amid a political and electoral crisis at home.

There are ongoing informal meetings in Mogadishu mediated by the international community to resolve the remove the obstacles surrounding the upcoming election in Somalia.

Sources closely linked to the office of the president confirmed to Keydmedia Online that Farmajo has received a call from Addis Ababa to meet PM Abiy Ahmed and Eritrean president, Isaias Afwerki to strike a defense and security agreement.

Abiy has recently visited Asmara, where he held talks with Afwerki and the outgoing Somali President will be joining in the next round of the meeting in Addis Ababa between the neighboring leaders who overstayed in power beyond their mandates.

Political Analysts believe that outgoing Farmajo has developed close ties with Abiy and Afwerki over the last three years with Asmara which is training thousands of Somali youths recruited by Fahad Yasin, the head of NISA, who wants to rule the country by force.