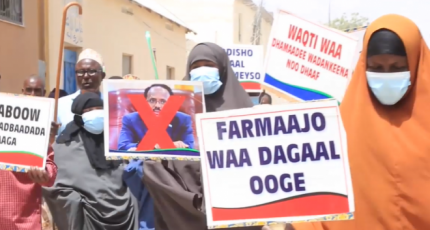 MOGADISHU, Somalia - Hundreds of people, mostly women marched through the streets in Mogadishu on Monday, demanding an immediate end to the ongoing fighting in Guriel city between SNA and ASWJ.

The protest took place at the Tarabunka junction and the angry demonstrators carried placards with slogans such as "We don't want Farmajo, we don't want Qoor-Qoor, we don't want a civil war".

They accused the outgoing Somali president Mohamed Abdullahi Farmajo and his close ally Ahmed Qoor-Qoor, the leader of Galmudug of creating a conflict in a stable region to score their political goal.

The former two-time Somali PM Omar Abdirashid Sharmarke said the use of elite forces in Guriel and other negotiable intrastate conflicts has been consistent with the Farmajo government’s actions in the past.

He further stated that Villa Somalia is seeing its interest as best served by weak & unstable Federal states in the country, where Farmajo and Fahad Yasin after taking power installed puppet leaders.

“This has been a strategy that has enabled Al-Shabaab to gain more territory than it had in 2017,” Sharmarke added. His remarks come as the death toll from Guriel's battle jumped to at least 30 people.

The fresh violence adds fuel to the old crisis in Galmudug state, including the Al-Shabaab menace and recurrent tribal as well the looming drought that came following a shortage of Gu’ rains this year.

The UNOCHA office in Mogadishu said more than 100,000 people fled the city ahead of the government offensive last week who are currently facing humanitarian catastrophe in the adjacent rural villages.

Top military commanders, including Danab’s chief in Galmudug major Abdiladif Feyle were killed in the fighting which comes as Somalia is in an electioneering period holding long-delayed parliamentary polls.