Somali troops stepped up military operations against the militant group which still poses threat to Somalia and elsewhere in East Africa. 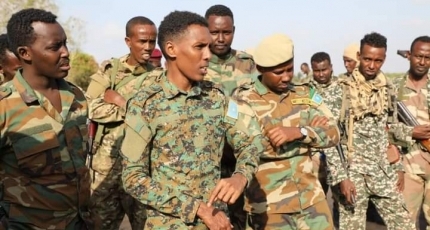 MOGADISHU, Somalia - The Somali government forces launched an operation in areas considered to be a stronghold of Al-Shabaab near Jowhar, Middle Shabelle’s regional headquarters in an attempt to dislodge the militants from their hideouts.

Gen Odowa Yusuf Rage, the commander-in-chief of the Somali army said the troops did face resistance from Al-Shabaab during the liberation of Warcis and Labashir, two key small villages near Rage-Elle under government control.

The SNA chief confirmed to state media that at least 15 Al-Shabaab members were killed in the offensive and captured dozens alive with their weapons whom he added will be rehabilitated and reintegrated into the society after being brain-washed by the terror group.

The operation, according to Rage will rage on until all areas remaining under Al-Shabaab rule are fully liberated and restored into government hands ahead of the parliamentary and presidential elections set to take place within two months.

Somali and AU forces have driven Al-Shabaab out of large swathes of territory in the past years, including Mogadishu following joint operations. But the Al-Qaeda-linked group still holds key areas in southern Somalia and waging attacks on military bases.

On Friday, Al-Shabaab has carried out two bomb attacks in Baidoa and Mogadishu, killing at least three people and wounded more than 10 others, the latest in a string of IED bombings in the country.