AU envoy to Somalia to step down from “mission 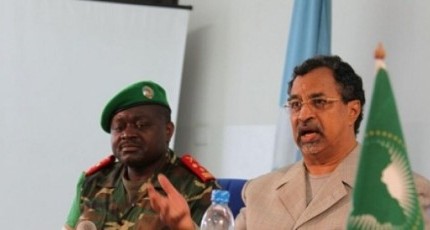 Yesterday he held separate meetings with the President, the Prime Minister and the Speaker of the Federal Republic of Somalia and formally introduced the Deputy Special Representative, The Honorable Lydia Wanyoto Mutende and the recently appointed Police Commissioner, Mr. Anand Pillay, as part of the handover process.

The AU Special Representative applauded Somalia’s leaders for their commitment to peace and reconciliation noting that through their efforts, the country is now registering tremendous progress on both the political and security fronts.

He said: “As I leave Somalia, I’m impressed by your determination to bring sustainable peace and stability to your country. I’m particularly happy to note that the horn of African nation is currently enjoying its longest period of relative peace since 1991 and that through your leadership, we have of late witnessed amicable resolution of disputes amongst various different groups.”

The AU Special Representative thanked Troop Contributing Countries (TCCs) as well as international partners, notably the UN and the EU, for supporting him during his tenure and for their continued commitment to peace and stability in Somalia. The contribution of Burundi, Djibouti, Ethiopia, Kenya, Sierra Leone and Uganda to the building of peace in Somalia is something of which all Africans can be proud. He said; “Despite Al-Shabaab’s desperate attempts to reverse the gains made so far, AMISOM’s determination to bring peace and stability to Somalia remains paramount.”

In his address to the officers and staff of AMISOM, during a dinner in his honor, Ambassador Annadif commended AU peacekeepers for supporting the Somali National Army in liberating strategic areas of the country from the terror group Al-Shabaab. He called on AMISOM to continue to adhere to relevant Human Rights and International Humanitarian Law when implementing their mandate.

“As we have witnessed in many other African countries, the problems of Somalia will ultimately come to an end and this Horn of Africa nation will reclaim its position within the continent and beyond.” said Ambassador Annadif.

The Deputy Special Representative of the Chairperson of African Union Commission (DSRCC), Honorable Lydia Wanyoto Mutende will head the AU Mission in Somalia until the appointment of a replacement.