Evelyn Diaz — Barkhad Abdi has had a whirlwind year of red carpets, limo rides and golden statues, but the actor’s reality isn’t as glamorous as the images we see on television. Abdi, a Somali immigrant who famously worked as a limo driver before he was cast opposite Tom Hanks in Captain Phillips, a role for which he earned an Oscar nomination, is struggling to pay his bills.
News Keydmedia Online
4 March 2014 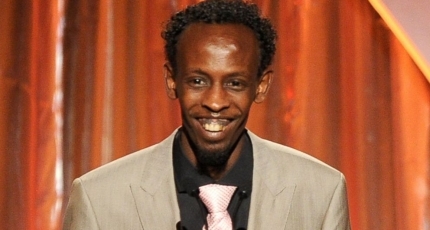 The 28-year-old actor earned $65,000 for his performance in the film, but that was two years ago and he has not acted in a movie since then. After wrapping his work on Captain Phillips, Barkhad went to work at his brother’s mobile phone store in Minneapolis, but he quit when the movie was released.

“How I thought about it was, like, When the movie came out, reviews either gonna be good or bad,” he told the New Yorker. “Either way, I cannot be working here.”

A profile in the New Yorker reveals the truth behind the BAFTA Award-winning actor’s enviable rise to fame. The $65,000 he earned for playing Somali pirate Muse in the film has almost run out, and the expensive suits and town cars he may have grown accustomed to in the past year are loaners, available to him only for official Captain Phillips-related publicity events. “Recently Abdi requested that he be allowed to stay at a commuter hotel near LAX to be closer to his friend, a Somali cabdriver from Minneapolis, who shuttles him around for free,” reads the article.

While he certainly wowed Hollywood with his surprisingly empathetic, nuanced performance inCaptain Phillips, versatility isn’t the first word casting directors will think of in regards to Abdi. Therefore, according to the New Yorker, his future earning potential as an actor is uncertain.

Abdi, meanwhile, is still dreaming big. The actor (who lost the Academy Award for Best Supporting Actor to Dallas Buyers Club‘s Jared Leto), plans to move permanently to Los Angeles with hisCaptain Phillips co-star Faysal Ahmed and pursue a career in Hollywood. He is currently reading scripts and has even landed his next role. Abdi is attached to star as a South African marathoner inThe Place That Hits the Sun.

Regardless of where the future leads, Abdi’s journey from war-torn Somalia, from where his family escaped when he was six years old, to the suburbs of Minneapolis to the front row at the Oscars is as inspiring as it is improbable. Perhaps one day he’ll be the subject of his own biopic.