Blasts, gunfire in Somalia kill four and wound others

Somalia is witnessing security threats from Al-Shabaab amid the chaotic electioneering period in the Horn of Africa country. 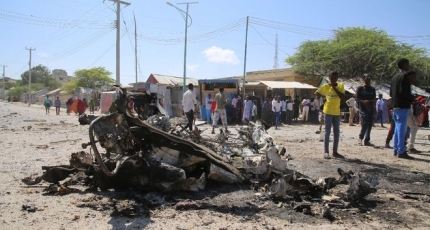 MOGADISHU, Somalia - At least four people have been killed and several others sustained wounds in bomb and gun attacks in southern Somalia for the past 24 hours.

A grenade explosion struck the town of Janale in Somalia’s conflict-riddled Lower Shabelle region on Saturday night, killing three people, according to the eyewitnesses.

The blast ripped through a security checkpoint in the newly liberated town and the dead were two NISA officers and a 12-year-old boy who was walking along the street.

A separate incident that coincided with the IED blast rocked a house belonging to a senior security official in Kismayo, the seat of Jubaland on Sunday morning.

No casualties were reported as a result of the attack which happened hours after US Africa command officials visited the port city, 500Kms south of Mogadishu.

There was no immediate claim of responsibility for the bombs in the Lower Shabelle and Jubba regions of southern Somalia, but Al-Shabaab carried out such attacks in the country.

Elsewhere in the country, one was killed in an exchange of gunfire at a hotel in Barawe, where an election for local counselors was taking palace on Sunday.

Somalia is witnessing security threats from Al-Shabaab amid the chaotic electioneering period in the Horn of Africa country which is trying to recover from three decades of conflict.

Al-Shabaab was forced out of the capital in 2011 and other key towns in the following years during joint military operations by Somali and African Union forces [AMISOM].

Despite being ejected swathes of territory, the terror group still control parts of the country and attack military, and civilian targets, mainly in Mogadishu and other regions.