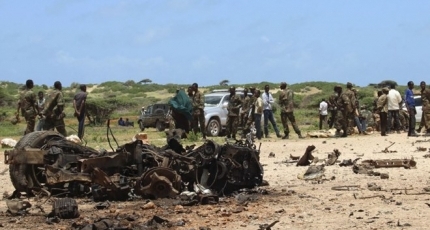 KISMAYO, Somalia - At least two senior Jubaland state army officials were reported to have been killed on Sunday after their vehicle ran over a landmine on the outskirts of Kismayo, a key port city located 500Kms south of Somalia's capital, Mogadishu.

The officers who were identified as Hersi Abdi and Ali Sharif died on the spot after their vehicle was blown up by the powerful roadside explosion in the vicinity of Abdalla-Biroole, a hotbed of terror in the Lower Jubba region.

In the aftermath of the attack, Jubaland forces moved from Kismayo have reached the scene and conducted an operation in response to the blast that claimed the lives of the army personnel.

There was no immediate claim of responsibility, but the areas around Kismayo in southern Somalia are notoriously restive and prone to attacks by Al-Shabaab terrorists.

Last Friday afternoon, an IED struck a bus carrying a football team in Kismayo, the current seat of Jubaland, killing at least four people, among them two soccer players and wounded nearly ten, some in critical condition.

Despite losing ground, Al-Shabaab remains a potent threat to the national security and the entire East Africa stability as the group carrying out lethal attacks in Somalia and Kenya.