The attack comes amidst worsening security and political situation in the capital of the Horn of Africa nation. 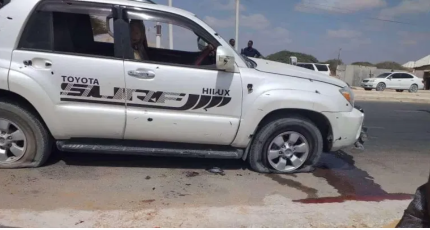 MOGADISHU, Somalia - A top Somali security official was killed and two others wounded in a powerful roadside bombing in the Somali capital, Mogadishu on Thursday morning.

Colonel Ali Barise died after his Toyota SURF vehicle was struck by an improvised explosive device [IDE] while driving in Deynile located north of Mogadishu, according to police sources.

Somali security forces cordoned off the blast site and evacuated the wounded to a nearby hospital for medical attention. There was no immediate claim o responsibility for the attack.

The death of the security officer came hours after at least four mortar shells fired at Halane base camp, the most protected place in Mogadishu, killing at least 3 people after their houses were hit by a shell.

Al-Shabaab, Al-Qaeda's most powerful ally in East Africa intensified attacks in Somalia, mainly in the capital taking advantage of the current political and electoral crisis in the country.

The leaders of the government and the Federal States are in deadlock over the process of the parliamentary and presidential election that missed its Dec and Feb deadline due to the rift.