Calls grow for an immediate end to the Galmudug fighting

The battle has claimed the lives of at least ten people and wounded 20 others on the first day and the tension still remained high near Dhusamareb. 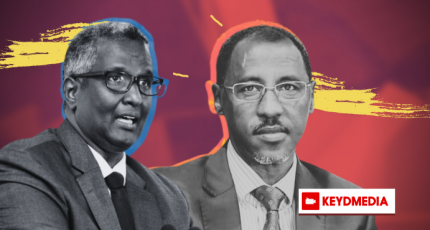 MOGADISHU, Somalia - Calls are growing for an immediate and unconditional end to fighting between Ahlu Sunna and Galmudug forces in parts of the Galgadud region in central Somalia.

Abdirahman Abdishakur and Abdikarim Guled, two heavyweight presidential candidates hailing from Galmudug said they are "extremely concerned over the fresh resumption of hostilities".

In series of Twitter posts, both presidential hopefuls called on both warring sides to resolve the conflict through dialogue and to unite in the fight against Al-Shabaab in Galmudug state.

"I am calling for the fighting in the Bohol area to be halted immediately. Galmudug's enemy is Al-Shabaab," said Abdishakur, adding that this war only serves for Al-Shabaab's interests.

He asked the leadership of Galmudug, traditional elders, and politicians from the region to turn the fighting into dialogue and to use the troops that were mobilized against Al-Shabaab.

"Prime Minister Roble should not also allow himself to be embroiled in another crisis," added the candidate. The PM is currently at loggerheads with Farmajo over the country's control.

"I call for an immediate end to the fighting of the Galgadud region. Any differences should be resolved through dialogue. The Fighting undermines the ability to unite against Al-Shabaab," said Guled.

Guled who served as 4th Galmudug president 2015-2017 urged the people of the Somali Federal State to work for peace and consensus which can lead to development and stability in the region.

The leaders of Ahlu Sunna who a year after returned to the region from abroad last month began military movements as they are in a struggle to regain control of key towns in Galmudug.

Thursday's battle in Bohol, about 35 km north of Dhusamareb has claimed the lives of at least ten people and wounded 20 others on the first day and the tension still remained high.