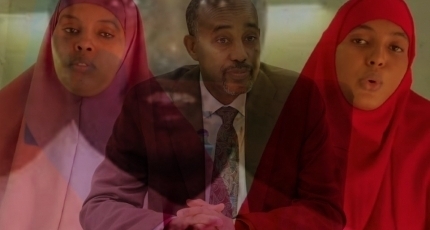 MOGADISHU, Somalia - Calls grow urging a sacked top Somali intelligence official to be held accountable for serious crimes he committed during his time in power.

Apart from the offenses done against the people in the capital and the Somali politicians, NISA's former deputy director Kulane Jiis has violated the rights of the citizens for movement and travel within their country after blocking the ex-Gedo governor Osman Nur Haji from leaving Mogadishu for six months.

Kulane Jiis who is a close relative of Farmajo, the outgoing Somali president has caused the most damage in Gedo, his homeplace because of the election for 16 seats in the Lower House chamber of parliament set to be elected in Garbaharey.

Some of the Somali mothers in Dolow district, Gedo region have called on the Prime Minister, Mohamed Hussein Roble, to take urgent legal action against Kulane Jiis and bring him to justice for the gross crimes, including murder, abductions, and violations of the law.

In a 10-minute video message to the PM, Fahia Mohamed, and Hibo Abdi Abdullahi, mothers in Dollow disclosed the abuses subjected to them during Kulane's time in NISA leadership.

They said encountered illegal arrests, torture, rape, oppression, and eviction by local forces acting on orders from Kulane and an administration sent by Farmajo from Mogadishu which committed atrocities in the Gedo region.

"The soldiers who kidnapped me was commanded by an officer working under Bakaal Kooke, the chief of the so-called stabilization forces in Gedo who worked with Kulane Jiis in Mogadishu," said Farhia Mohamed, asking the PM to arrest him and arraign in court.

The spy official and NISA head at the airport were relieved of his duties last Friday hours after they denied Haji access to board a plane at Mogadishu airport, ignoring previous orders from the PM's office to allow citizens free moment during the election.