Al-Shabaab collects extortion from local farmers and pastoralists in areas under its control in Somalia which sometimes sparks clashes. 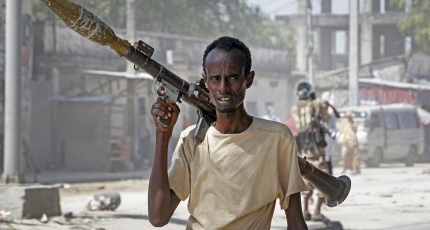 MOGADISHU, Somalia - An uneasy calm returned to the central town of Bahdo near Mataban town, on Monday after two days of fighting between armed residents backed by the government forces and Al-Shabaab militants.

The fierce battle erupted after the Ma'awiisley militia in collaboration with soldiers from the 27th Division of the Somali National Army attacked an Al-Shabaab base in the area located ​​Hiran region on Saturday.

Hassan Farah, who led an attack on the Al-Shabaab base, said they had recovered several AK47 rifles and an RPG after overpowering the militants during the gunfight that also caused casualties.

Al-Shabaab has not yet commented on the fighting in Bahdo, which was a staging ground for its attacks in the Hiran region, where Somali and Djibouti peacekeepers have been protecting for years.

The Ma'awiisley forces that started the fight against Al-Shabaab are said to have been organized by the Governor of Hiran Ali Jeyte and the commander of the 5th Battalion of the 27th Division of the Somali military in the region Colonel Mohamud Bakay.

Clan militias recently attacked an area on the outskirts of Beledweyne, killing members of Al-Shabaab in retaliation for a tribal elder who was killed by terrorists in the town last month.