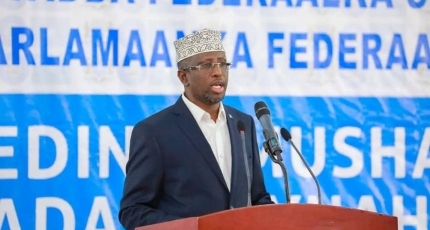 MOGADISHU, Somalia - Thirty-nine [39] candidates running for the presidency of Somalia have today concluded two-day speeches in parliament under tight security following a suicide attack on the first day.

One woman is among the runners. Fowsiya Yusuf Haji Adam, who served as the first Somali female deputy PM and foreign minister during Hassan Sheikh’s time said she sees the change at the end of the tunnel.

The election was due to happen in February 2021 but was delayed for 15 months after Farmajo attempted to extend his mandate in office by two more illegal years which has plunged the country into political chaos.

The opposition candidates are credited for their bravery to mobilize forces in Mogadishu to prevent an attempted coup by Farmajo twice since last year. The May 15 election could not happen if they kept silent.

The majority of the presidential hopefuls are united in one common goal – to unseat Farmajo and allow the country to move forward and recover from three decades of conflict that was the result of dictatorship.

The upcoming election will be closely watched as the people of Somalia are eager to see a new dawn and the end of Farmajo’s era. The vote will take place at Mogadishu airport’s Afisyoni hanger next Sunday.

Each candidate paid a $40,000 registration fee as part of a set of conditions to join the costly race which the new MPs make them smile as they sell their votes with hundreds of thousands of US dollars.

Since 2000, the elections held in Somalia have been marred by vote-buying, malpractices and a lack of transparency due to the lawlessness and a strong governance system in the nation.