Security around the venue has been tightened with Somali and AU troops deployed on the main streets. 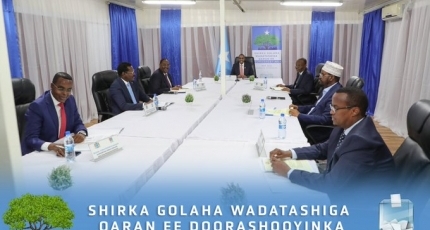 MOGADISHU, Somalia - Somali PM and leaders of the country's Federal States are holding the second round of top-level talks on Sunday to defuse long-running deadlock over the electoral process.

The two sides have agreed to resume stalled election talks early this month to "narrow down differences" over the implementation of the Sep 17 poll deal as previous negotiations led by outgoing president Farmajo collapsed.

The incumbent has agreed to hand over the election and security responsibility to the caretaker PM Mohamed Hussein Roble days after clashes in Mogadishu and pressure from both opposition candidates and the international community over his illegal two-year term extension.

Leaders attending the conference last night held private meetings with some members of the Somali presidential candidates' union. The presidents of Jubbaland and Puntland, Ahmed Madobe and Deni, also met with politicians from the northern regions.

Although no official date has been announced for the period that the conference goes on, the people of Somalia are keeping an eye on the outcome amid calls by the international partners on leaders to reach a quick deal on the electoral standoff.

The country has postponed its election twice due to the lack of consensus on the dispute that led the president to extend his mandate through the Lower House vote that put Somalia at risk of returning to civil war.

The main contentious issues include who will be in charge of the Garbaharey election for MPs - the government or Jubaland state and the appointment of the electoral body for the election of the northern seats in parliament as well the formation of the poll committees.