Children among 8 killed as IED hits a minibus in Somalia

The incident was in the latest attack targeting passenger vehicles in the violence-wracked Horn of Africa country that has been trying to recover for three decades of conflict. 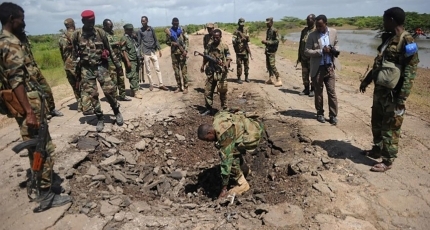 MOGADISHU, Somalia - A Somali regional official says at least eight civilians, including children were killed and three others wounded on Tuesday after a roadside bomb struck a passenger bus in the Mudug region.

Mudug Governor Abdirahman Ali Diriye reported two explosions on the outskirts of Ba'adweyne, including one that ripped through the passenger vehicle carrying women and their children, and injured three others.

The governor added that the wounded were taken to Galkayo hospital, where they are being treated. He has pointed the finger of the blame at Al-Shabaab, the Al-Qaeda-linked group which lost several strongholds in Mudug to Somali forces in the past few weeks.

The people who were killed and wounded in the blasts were among those displaced by the fighting in Ba'adweyne during its liberation from Al-Shabaab but returning today, he stated.

The attack occurred in the central province, raising fears of fresh violence in the months or weeks ahead as the Somali military readied a final offensive to retake the last remaining areas, including Haradhere from Al-Shabaab militants.

Al-Shabaab has lost ground but the group still remains a potent threat to security and capable of carrying out lethal attacks in the government-controlled areas, mainly in Mogadishu as the country is in an electioneering period.