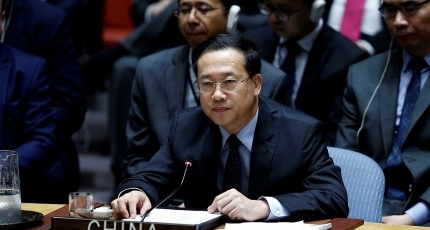 NEW YORK - China has on Tuesday abstained from a United Nations Security Council vote to extend the arms embargo on Somalia that has been in place since January 1992.

Russia and Equatorial Guinea joined China in the rejection of the 2498 resolution which bars Somalia from being lifted from the embargo that hampered the rebuilding of the army.

China has dragged on its feet on the 30-year arms embargo on Somalia, argues that the UNSC should assess the situation on the ground before extending every year without question.

Zhang Jun, China's envoy to the UN has accused the Council of failing to support Somalia's efforts to rebuild SNA and take the security responsibility from the AU forces.

For his part, Abukar Balle, Somalia's envoy to the UN thanked China's bid for a Somalia-based approach to lifting the arms embargo on his Horn of Africa country beset by conflict.

Balle told the UN security council that the sanction is restricting Somalia's ability to acquire sophisticated weapons necessary to defeat Al-Shabaab, which is the main threat to security.

The 15-member UNSC condemned the Iran-made arms supply to Al-Shabaab from the war-torn Yemen, where Houthis have been battling against the Saudi-led Gulf coalition since 2015.

The Council imposed the arms embargo on Somalia 30 years ago to ban the resale or transfer of weapons or military equipment supplied to the warlords who toppled the military regime.