China to provide assistance to Somalia in SNA rebuilding

China and Somalia have had a historic relationship, which has now returned after 30 years of war in the Horn of Africa country. 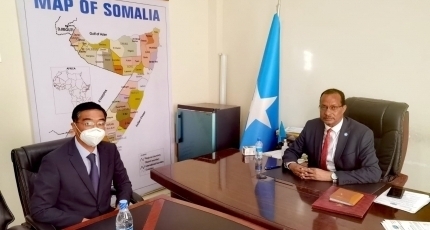 During the talks, the Defense Minister briefed the Ambassador on the rebuilding of the national army, which is set to take over security responsibilities from AMISOM next year.

Shengchao praised the government's efforts to reform the forces, assuring the minister that Beijing will give assistance to the SNA to regain its glory days - the strongest army in Africa.

The top diplomat reiterated China's commitment to helping Somalia get back on its feet by providing financial and military aid as well as in the development and humanitarian fields.

China and Somalia share historic ties that date back to the 1970s, which has now returned after 30 years of conflict in the Horn of Africa country. Beijing has an embassy in Mogadishu.

The bad side of the story is that China has been accused of engaging in illegal fishing off the coast of Somalia, looting the expensive Tuna fish which is abundant in the country's waters.