During the phone call, Somali Foreign Minister Abdisaid Muse Ali promised to push back against the self-ruled island's relationship with Somaliland, which split from Somalia three decades ago, and set up mutual representative offices with Taipei in 2020. 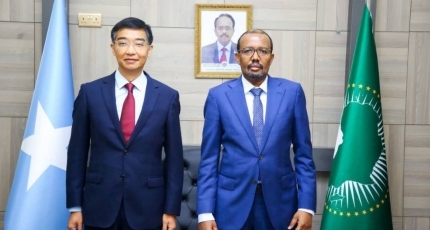 MOGADISHU, Somalia - When China's Foreign Minister Wang Yi spoke with his counterpart in Somalia on Monday, they had a common mission - to resist Taiwanese inroads into what the Horn of Africa nation considers its territory.

They both want an end to the Taiwanese-Somaliland relationship, which Wang said threatened the sovereignty, independence and territorial integrity of China and Somalia.

During the phone call, Somali Foreign Minister Abdisaid Muse Ali promised to push back against the self-ruled island's relationship with Somaliland, which split from Somalia three decades ago, and set up mutual representative offices with Taipei in 2020.

Do you have questions about the biggest topics and trends from around the world? Get the answers with SCMP Knowledge, our new platform of curated content with explainers, FAQs, analyses, and infographics brought to you by our award-winning team.

Somalia opposes the collusion between Taiwan and Somaliland, which violates the sovereignty of Somalia, and will continue its strategic and practical cooperation with China,'  Abdisaid said.

Somaliland is diplomatically isolated like Taiwan, which Beijing considers part of its territory. Only eSwatini previously Swaziland now recognizes Taipei in Africa.

Somaliland has set up representative offices in Djibouti, Ethiopia, Kenya, Sweden, the United Arab Emirates, Britain, and the US in a bid to win international support for its full recognition.

There have been growing calls for Washington to set up a representative office in Somaliland, which welcomed a congressional staff delegation to its capital Hargeisa in mid-December.

China will continue to assist Somalia's reconstruction and development ... provide much-needed humanitarian supplies, and discuss the implementation of livelihood improvement projects in safer regions,' Wang said, according to a statement released by China's foreign ministry.

Observers said Beijing and Mogadishu had been angered by last month's visit to Taipei by a Somaliland delegation, led by Foreign Minister Essa Kayd Mohamoud.

This relationship is regarded by both Somalia and China as a violation of their sovereignty,' said Abdalgani Aid Almi, a lecturer at New Generation University's Hargeisa campus.

While Beijing regards the return of Taiwan to mainland control as a priority, weak Somalia is facing more pressing issues than the undermining of its sovereignty, Almi said.

It is for China to negotiate with Somaliland and promise alternatives to quit this relationship, he said.

According to David Shinn, a professor at George Washington University's Elliott School of International Affairs, Beijing's increasing contact with Somalia is a result of its deep unhappiness with Somaliland and its flirtation with Taiwan.

He pointed out that China provided only modest financial support for the African Union's peacekeeping effort in Somalia and had not otherwise been involved in efforts to combat the al-Shabab terrorist threat.

China has an embassy in Mogadishu and continues its contribution from Djibouti to the anti-piracy naval task force in the Gulf of Aden, but piracy has essentially disappeared. China is not doing much in Somalia,' Shinn said.

Dr. Elisa Gambino, a fellow in the international politics of China at the London School of Economics, said the Wang-Abdisaid call was also related to the recent appointment of Xue Bing as China's special envoy to the region.

The strengthening of Taiwan-Somaliland relations - as suggested by the recent visit of the Somaliland foreign minister to Taipei - has the potential to hinder some of the Chinese interests in the region,' she said.

Specifically, the port of Berbera in Somaliland could become a competitor for traffic from Ethiopia, which is now handled through Djibouti.

According to Gambino, China is also likely to increasingly engage in African security, but this is likely to continue within the parameters of African Union or UN missions.

China has massive interests in the Horn of Africa. Ethiopia's US$4.5 billion Addis Ababa-Djibouti railway was funded and built by Chinese interests, which also established ports and free-trade zones in Djibouti.

There is also China's first overseas naval base, established in Djibouti in 2017 and strategically positioned on the Bab el-Mandeb Strait, a chokepoint between the Red Sea and the Gulf of Aden.

Guled Ahmed, a non-resident scholar at the Middle East Institute, said China's interests in Somalia are geopolitical and geoeconomic.

The phone call was more political than about bilateral relations, to give assurance to the Chinese government that the Somalia government doesn't recognize Somaliland and sees the Taiwan government infringing its sovereignty,' he said. Ironically, the Somali government doesn't control even one street in Mogadishu and it's under the protection of the African Union Mission to Somalia.

China's geoeconomic interests in the country are mainly in extractive industries such as mining, oil, and fishing, with the latter subject to claims - denied by its embassy in Somalia - that Chinese companies are operating illegally.

According to Ahmed, fishing licenses granted to China in 2018 contained several flaws, including extremely undervalued fees which made fishing almost free. Since their expiry, China was continuing to fish in Somalia's waters, as well as within the economic exclusive zone which had never been part of the agreement, he said.

From a geopolitical standpoint, China regards Somalia's international waters as a geostrategic asset that warrants security protection and a maritime partnership with the Somalia government, Ahmed said.

Chief among China's maritime interests is the underwater Peace cable project, part of its Digital Silk Road ambitions to link Asia, Europe, and Africa, he said.

China escorts its trading ships within the Gulf of Berbera, known as the Gulf of Aden, and is concerned about Somaliland and Taiwan's growing diplomatic and economic relations,' Ahmed said, pointing to the recent maritime security agreement between Taipei and the Somaliland government.

[The agreement] will provide [Taiwanese] training to the Somaliland navy and hi-tech equipment to protect its territorial waters,' he said.

China sees this as a threat to [its belt and road plan] and a deterrence to potential Chinese companies' fishing exploitation within Somaliland water territory.

John Calabrese, head of the Middle East-Asia Project at American University in Washington, said Somaliland, on the lookout for friends and partners, had found an eager partner-patron in Taipei.

But I guess that this thinly veiled effort to antagonize China was primarily intended, not to curry favor with Taipei but to attract support from the United States,' he said.

Citing recent media reports, Calabrese said Somaliland's 'unofficial officials' have been making the rounds on Capitol Hill, in an attempt to persuade US lawmakers that they can be valuable allies in the strategic contest between the US and China.