Dozens of Somalis posed for selfies and chattered excitedly in rows of red, plush seats as they waited for the start of their country's first movie screening in three decades. 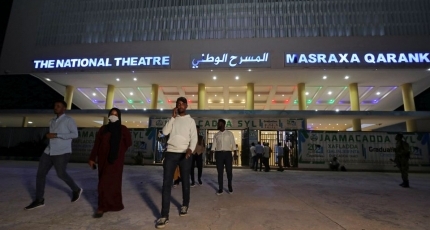 MOGADISHU, Somalia - Among the crowd in the National Theatre was 24-year-old Kaif Jama, the writer and star of both films on the programme - the horror story "Hoos", about a single woman moving into an empty house, and a not-so-romantic comedy called "Date from Hell".

"This means something for everyone including me. This is for every Somali who wants to make movies," Jama said, wearing a traditional Somali dress striped silver, yellow and green.

She left Somalia when she was six and moved between Kenya and Uganda before settling in Cairo aged 19.

Since then, she has made 60 short films and skits with Somali filmmaker Ibrahim CM.

Somalis have spent years watching Indian and Arab films on their televisions, she said. "But if our own movies come to cinema and TVs then every single Somali person and child will be shaped and influenced by their own culture."

The National Theatre, a gift from China's Mao Zedong, opened its doors in 1967.

After the overthrow of president Siad Barre in 1991, clan-based warlords blasted each other with anti-aircraft guns and fought over the theatre, which they used as a base. The building was hit so many times that the roof collapsed a year into the conflict.

Islamist militants who seized control in 2006 took over the building. They banned all forms of public entertainment - from concerts to football matches - that they considered sinful.

African Union peacekeeping troops clawed back control of the capital in 2011 and the new Western-backed Somali government reopened the venue the following year. But just three weeks after that, a suicide bomber from the Islamist al Shabaab insurgency struck during a ceremony, killing six people. The building reopened again in 2020.

Mogadishu resident Hassan Abdulahi Mohamed remembered spending half a Somali shilling on a movie ticket and one shilling on snacks at the theatre in the 1960s.