Demonstration Against Discrimination In Kismayo

Kismayo (KON) - Hundreds of people from the oppressed Somali Bantu Wagosha community have demonstrated in Kismayo, the provincial city of Lower Jubba region in protest of killings, arrest and many other forms of mistreatment against the community by Ahmed Madobe's clan administration.
News Keydmedia Online
23 August 2014 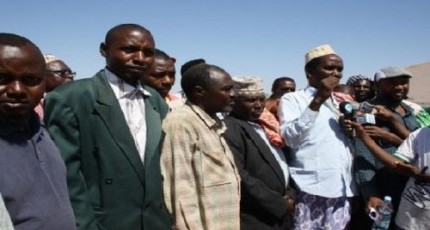 The demostrators marched in Kismayo streets chanting "No more killings in my homeland, we do not  want clan administration, down to injustice and oppression against Wagosha and others".

One of the demonstrators told the media that maltreatment against the innocent civilians have risen up since Ahmed Madobe nd is clan militants set a foot in Kismaayo in October 2012. He said the clan militants carry daily operations at Somali Bantu houses, kill, and arrest innocent people as well as looting and forcing some of them to leave the city.

One of the African Union military commanders in Kismaayo has confirmed to the media about the demonstration of the Bantu people and how they suffer in the hands of the clan militants who dominate and rule he city with the help of Kenyan forces. The demonstrators also expressed concern over the planning of the international community to hold a reconciliation conference in Kismayo as well as carrying out military operations to liberate areas still controlled by the  extremist group al Shabab.

Eplaining why they oppose the move, a prominent Somali Bantu elder who declined to be named, said the reconciliation as in the past will e hoax since the Somali Bantu willnot be allowed to select their representatives, and instead Ahmed Madobe will come up with puppet members from Eastleigh suburb in Nairobi to claim representing the Somali Bantu.

He added that the military operation to remove Al Shabab is welcomed by all Somali Bantu, but they fear that Ahmed Madobe will settle his people in the lands of Wagosha people,  a policy that has been in the use since the independence of Somalia by all Somali governments.

The elder said such a move can result more violence in Jubba regions, since people will no longer be in position to accept persecution, massacre, land grabbing and looting as happened in early 90ties. He said the ongoing plans of refugee repatriation is aimed to grab the land of Wagosha community.

The Wagosha is the largest and the indigenous community in Jubba , but has been subjected to all forms of discrimination and massacre since the independence. Previous Somali governments have also used different methods to deny the rights of the Somali Bantu in Jubba, including creating false history, while explorers such as Ibn Batuta mentioned the Bantu people in his Africa journey in 1320 as per this reference :http://ibnbattuta.berkeley.edu/4eastafrica.html

Some of the Somali Bantu leaders in the region believe the only solution to this problem is to recognize the their rights or be armed as other clans so that they can defend their rights and their lands.