Djibouti Will Deploy Battalion of Troops to Somalia by Year-End 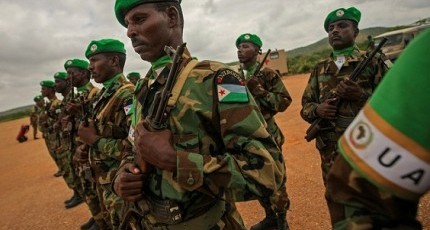 The soldiers will help consolidate gains made by Djibouti’s armed forces in Somalia’s central Hiraan region, Youssouf said in an interview yesterday from the capital, Djibouti. Its troops have captured the districts of Buuloburde and large parts of Beledweyne from al-Qaeda-linked militants, he said.

“We need that strengthening,” Youssouf said by phone. “In a few weeks time, we should deploy 450 troops and then another 500 a couple of months later.”

Djiboutian forces are part of the 22,000-strong personnel under the command of the African Union that is battling an insurgency by al-Shabaab Islamist militants in Somalia.

Djibouti is boosting its contribution to the multinational army after suspected members of the militia attacked a restaurant in Djibouti in May and killed a Turkish national and injured “several” other foreigners, according to Agence-France Presse. It was the first suicide bombing in the country’s history.

Djibouti has subsequently boosted security across the country, Youssouf said. The U.K. government warned last month that al-Shabaab plans to carry out further attacks in Djibouti, including Western interests. The country hosts the biggest U.S. military base in Africa at Camp Lemonnier.

“We have increased security checkpoints” in the capital and at the border, Youssouf said.

At least 15 people are suspected to have taken part in the attack on the restaurant, including two suicide bombers who died, he said. Five suspects were arrested in Djibouti, six in neighboring Somaliland, a semi-autonomous region of Somalia, and two in Ethiopia. While the six have been extradited from Somaliland, talks with Ethiopia on the extradition of the remaining two are continuing, he said.

Djibouti, about the size of the U.S. state of New Jersey, has a $1.2 billion economy that relies on services related to the country’s location on the Red Sea, one of the world’s busiest shipping lanes.