Farmajo has failed to move Somalia forward and hold a timely election at the end of his four-year term. 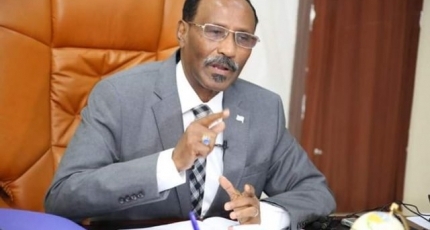 Speaking on Facebook Live debate, Beyle expressed despair over the current economic situation in Somalia, saying the suspension of the donor money had greatly impacted the Farmajo administration.

“We have nothing at all,” he said, adding that the government accounts dried up after cash from Saudi Arabia and Qatar that helped to pay the civil servants’ salaries finished.

“The donors stopped providing budgetary support to Somalia in August 2020. Until December last year, we had been spending money from KSA and Qatar to cover salaries. From January until now, we don't have anything to offer,” added the minister.

In addition, Dr. Beyle has called on Somalis both at home and abroad to support the government and invest in their country to move out of the long-standing dependence on foreign aid.

The minister didn’t provide further details about why the donors have this critical time stopped the financial assistance to Somalia. The move seems aimed to isolate Farmajo who is clinging the power.

The Lower House of Somali parliament has on April 12 voted to extend the mandate of sitting leader to two years amid efforts by the international community to resolve the electoral rift through dialogue.

The decision has complicated the situation and dimed the people's hope for a peaceful and inclusive election in the country which has been trying to recover from three decads of bloody conflict.