Millions of people in Kenya, Ethiopia, and Somalia face starvation due to delayed rains and a lackluster growing season. Aid organizations warn of a "catastrophe" if urgent action isn't taken. 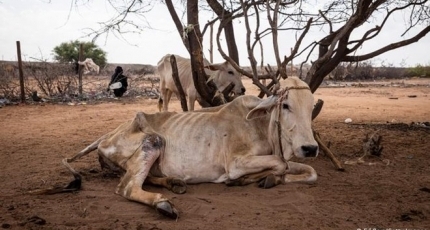 The wind is dry and the heat is punishing in Kapetadie, a remote village in Turkana County in northern Kenya near the border to South Sudan.

Parched earth stretches as far as the eye can see, littered with the carcasses of dead cows, goats and other livestock who have died of thirst and hunger.

The village's only water source isn't clean, he says and people along with their animals, who also drink there, run the risk of getting sick and dying.

Only 10% of the expected rainfall fell in Turkana in the last six months of 2012.

The vegetation is withered and there's little for the traditional herders living here to graze their animals on.

The surface water is also almost gone  — 80% of water sources in Turkana have dried up, according to the United Nations humanitarian agency OCHA.

With their livestock malnourished and dying, many here have no animals to sell at the market. And with harvests way below normal levels elsewhere in Kenya because of the lack of rain, food prices are skyrocking.

As a result, around two thirds of Turkana's 900,000 people are facing starvation, Kenya's drought authority say.

The normally arid region has become even dryer as it experiences a years-long drought, says the head of Turkana's water service, Vincent Palor.

"We have not had rain for the last few years and this is actually exacerbating the situation," he told DW.

To make matters worse, 40% of the county's boreholes that tap into groundwater reservoirs are broken, a recent survey revealed, due to failure to provide routine maintenance.

Millions at risk of severe hunger

Many communities across East Africa are facing similar fates, with small-scale farmers and herders the hardest hit and the least able to cope.

The United Nations estimates that 13 million people across Kenya, Ethiopia, Eritrea and Somalia are suffering severe hunger due to persistent drought conditions as the region is hit with the driest conditions recorded since 1981.

Aid organizations worry that the situation in East Africa will likely deteriorate further without urgent and scaled-up support.

The international aid group Oxfam warned that the hunger crisis could quickly turn into a "catastrophe" if aid fails to reach the most vulnerable.

"The brutal truth is that at the moment, East Africa is not on the global agenda,'' Oxfam International Executive Director Gabriela Bucher told AP news agency.

Hundreds of thousands of people in East Africa could die this year due to the hunger crisis, she said.

In Somalia, the drought emergency has intensified with the number of people affected increasing to about 4.5 million people, up from 3.2 million in December 2021.

Many families in drought-ravaged rural areas are fleeing to major cities in search of food and water.

At the Al-Hidaya camp for internally displaced persons on the outskirts of the capital Mogadishu, Halimo Ali tries to console her four-year-old son.

Her family traveled to the camp, which currently holds more than 800 families, from the south of Somalia.

"We have lost our cows and goats because of the severe drought," Ali told DW. "We could not get food and water so we decided to move."

Many of those arriving at the camp are malnourished and sick.

"These drought-affected people suffer from a lack of enough food while the children also suffer from anemia measles, and weak bones," community leader and camp chairman Nadifo Hussein said.

He said that with more people traveling to the capital from drought-hit regions, his camp would soon be unable to help new arrivals.

Aden Farah, Humanitarian Advisor for Save the Children in Somalia, said about 671,000 people had been displaced internally in the country due to the drought.