Somali politicians have launched frantic efforts to defuse tensions after a damaging feud between the president and prime minister plunged the troubled country into fresh crisis, a lawmaker and multiple officials said Friday. 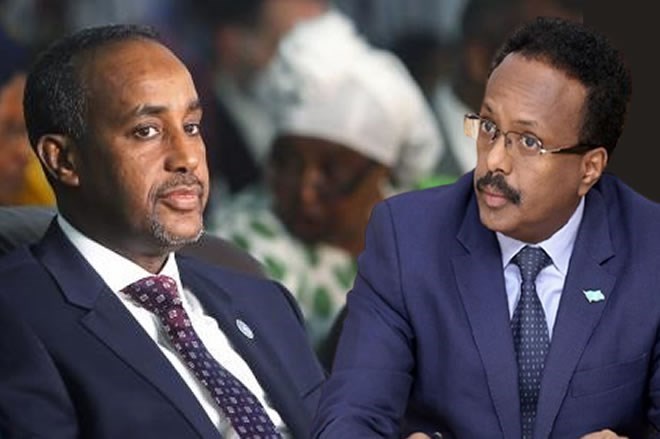 MOGADISHU, Somalia - The very public spat between President Mohamed Abdullahi Mohamed, better known as Farmajo, and Prime Minister Mohamed Hussein Roble has raised fears for the stability of the Horn of Africa nation as it struggles to hold long-delayed elections and keep an Islamist insurgency at bay.

The pair have clashed twice this week over hirings and firings within Somalia's security agencies, raising fears of an all-out power struggle at the highest levels of government.

But on Friday, a lawmaker told AFP that senior leaders had stepped in to resolve the dispute.

"There are politicians including heads of some member states who have intervened in the situation... and efforts have been started to mediate between the president and the prime minister", Abdifatah Mohamed, a member of Somalia's parliament, told AFP.

"I hope this will bring an end to the political conflict," he said.

The row erupted earlier this week when Roble sacked Somalia's intelligence chief over his handling of a high-profile probe into the disappearance of a young agent.

Roble in turn accused the president of "obstructing" the investigation, and in a late-night move on Wednesday, fired the security minister and replaced him with a Farmajo critic.

The spat has sparked fears of violence and prompted senior leaders to intervene in the matter, with officials telling AFP that the presidents of Somalia's Galmudug region and Southwest state were working to end the impasse.

"The mediation efforts started last night and will continue", a senior official with close ties to Farmajo's office told AFP on condition of anonymity.

"The president and the prime minister have agreed to the negotiations and talks have already started.... There are hopes that the tension will ease very soon", another official with the Southwest state's delegation told AFP.

But in a sign of the heightened political temperature in Mogadishu, a coalition of opposition presidential candidates on Friday released a statement saying it "supports the prime minister... and condemns the actions of the outgoing president".

The row has threatened to throw an already fragile electoral process into deeper peril.

Farmajo's four-year mandate expired in February, but was extended by parliament in April, triggering deadly gun battles in Mogadishu, with some rivals viewing it as a flagrant power grab.

Roble cobbled together a new timetable for a vote, but the process fell behind, and this week he accused Farmajo of trying to reclaim "election and security responsibilities" from him.

The Al-Qaeda allies were driven out of Mogadishu a decade ago but retain control of swathes of countryside and continue to stage deadly attacks.