Somalia has signed a security cooperation agreement with Ethiopia and Eritrea in September 2018. 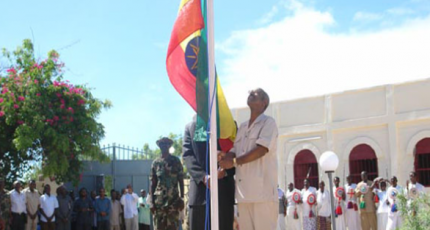 MOGADISHU, Somalia - Ethiopian embassy in Mogadishu has played a role in the deployment of Somali soldiers training in Eritrea to the neighboring Tigray region during last year's conflict, Keydmedia English Service has learned.

The exclusive report says the embassy which is located inside the presidential palace known as Villa Somalia had persuaded Farmajo and Fahad Yasin to send troops to the northern region to take part in the fight along with the Ethiopian military against the TPLF.

The leaders of Somalia, Eritrea, and Ethiopia formed an alliance in East Africa have signed in Asmara a security cooperation agreement in September 2018, in which the three leaders agreed to send troops if one of them went to war.

According to the sources, after lengthy negotiations, Fahad and Farmajo bowed to Ethiopian government pressure and agreed to send an undisclosed number of troops who were undergoing two-year training in four camps in Eritrea to the Tigray region.

"According to the relevant reliable sources, thousands of Somali soldiers were taken to Eritrea, without proper documentation. Which makes the situation even more difficult," said Abdisalam Guled, the former deputy Somali Intelligence chief.

Guled is the first official who broke the news about the Somali soldiers' involvement in the Tigray war and said most of the recruits estimated between 400-1000 have been killed in the battle while the remaining are held hostage in Ethiopia.

Hundreds of Somali parents took to the streets after hearing this news and demanded the government of Somalia to bring back their children and still they are awaiting answers from Farmajo and Fahad who are responsible for the recruitment and dispatch to outside war.