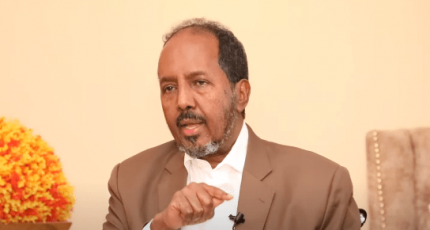 In a statement, Mohamud supported the decision by the country's prime minister to fire the head of intelligence Fahad Yasin, who is the main suspect in the female spy agent's killing.

"The PM is responsible for all executive bodies in the country, including the security forces," said Mohamud in a statement on Monday following the collusion between top leaders.

Mohamud lauded the appointment of new acting NISA director Gen Bashir Goobe, saying the decision could lead to finding who was behind the mysterious death of Tahlil.

Goobe served as Director of the National Intelligence and Security Agency 2013 – 2014 and Chief of the Somali Custodial Corps 2018 – 2019. He is a long-serving army general.

The former president is currently a presidential candidate and leads an opposition coalition. He urged the PM to continue exercising his constitutional duties in serving the country.

The case of Ikran Tahlil, 25, just reached a national level and led to a standoff in Villa Somalia. She was abducted on June 26, 2021, and subsequently killed as NISA reported last week.

She was a cyber-expert in Somalia’s National Intelligence and Security Agency (NISA) since 2017. The girl had sensitive information critical to Fahad Yasin and Kulane Jiis, per sources.

The family of the girl demanded justice from the PM, who instructed the prosecutors of the military court on Monday to execute a throughout and swift probe into the gruesome murder.