There was no immediate claim of responsibility for the latest attack but police pointed the finger of the blame at Al-Shabaab, an Al-Qaeda ally that often carries out such attacks in Somalia. 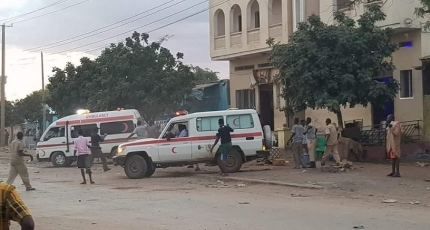 AWDINLE, Somalia – An explosion at a crowded restaurant in southern Somalia has left at least five people dead and seven others wounded on Sunday, security officials said.

The blast happened in Awdinle town in the Bay region when an improvised explosive device (IED) detonated at a restaurant during the busy lunch-time, according to local authorities.

There was no immediate claim of responsibility for the blast but police pointed the finger of the blame at Al-Shabaab, an Al-Qaeda ally that often conducts such attacks in Somalia.

Explosions in Somalia have become recurrent over the past few months as the country is holding a disputed parliamentary election that saw massive fraud and irregularities.

Last week, at least eight people were killed and dozens, including students in a car bombing targeting a UN convoy outside a school along KM4-Tarabunka road in the capital, Mogadishu.