False information and propaganda are serious issues that can influence government decision-making and undermine the economy, according to Abdirashid Mohamed Hashi, the communications director of the Somali Presidency. 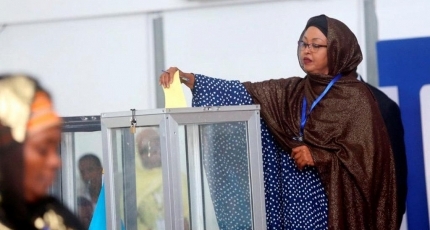 MOGADISHU, Somalia - The unfiltered flood of information through social media networks has confused Somali people, who are struggling to differentiate between disinformation, misinformation, and true information, particularly in relation to politics, as the Horn of Africa country is in the middle of parliamentary elections.

Somalia, which is struggling with drought, terrorism, and economic issues, is going to complete the clan-based electoral process called the “4.5 system” on Feb. 25. So far, 120 members of the 275-seat lower house have been elected, with the remaining 155 members to be elected before the deadline.

However, as the election process nears its completion, misleading or propaganda material about rival candidates is spreading more, potentially jeopardizing the country's political stability.

False information is a worldwide problem, and certain individuals and groups are actively involved in spreading various forms of hatred for personal gain.

Somalia is in a similar situation, with people having easy access to the internet, as well as technological advancements and the wide availability of smartphones. And, because there is no mechanism in place to regulate or properly handle social media content, some people are spreading false information for political advantage.

Both the government and the opposition have accused each other of operating a social media disinformation campaign in the country.

False information and propaganda are serious issues that can influence government decision-making and undermine the economy, according to Abdirashid Mohamed Hashi, the communications director of the Somali Presidency.

The African Union (AU) annual summit in Addis Ababa, the Ethiopian capital, earlier this month, which was also attended by Somali President Mohamed Abdullahi Mohamed, discussed the issue and how to establish a continental media development center, as well as the ways to combat "fake news" and misinformation, according to Hashi.

"These challenges pose a threat to the country's development and have the potential to contribute to political instability and insecurity," he warned.

"Misinformation reached a critical juncture during COVID-19 and the country's parliamentary elections, affecting electoral commissions, and there is widespread misinformation during election results, which is very dangerous and so dangerous even before the country's most important presidential election," he added.

He stated that Somalia is a fragile country recovering from civil war and lawlessness, but that it has taken a "milestone step and progress toward forwarding" and that it "cannot handle the problem of fake news at this scale."

To tackle the issues, Hashi said, the government is seeking help from friendly countries such as Turkiye. "We're working on these issues with countries that are very close to us, like Turkiye, our brotherly country," he added.

He stated that the government is striving to manage, combat and establish guidelines to govern social media.

In a tweet to his Somali counterpart earlier this month, Turkish Communications Director Fahrettin Altun stated: "May our brotherhood prosper for working even harder to combat disinformation, fake news, and any sort of manipulation targeting our nations."

He alleged that the country's top elites are contributing to the problem by misleading the people and utilizing false news to carry out personal attacks.

"I believe that the spread of misinformation on social media is part of a malicious and damaging campaign against the country's politicians. It's impossible to accept character assassination through social media," he remarked.

He pointed out that attacking opposition candidates, politicians, or elected members on social media is damaging, but expressing one's viewpoint is normal without weaponizing it or misleading the public.

"We, the opposition, regard false news and misinformation as a threat to Somalia's fledgling democracy," he said.

He noted that politicians in the presidential candidates' council, including some heavyweights such as Hassan Sheikh Mohamud and Sharif Sheikh Ahmed, two former heads of state, are among numerous politicians who have been politically attacked by false information.

He believes it is important to create public awareness and teach that everyone has the right to freely express themselves without misrepresenting or violating their constitutional right to freedom of expression.

To save Somalia's fragile democracy, he proposes a broader spectrum of awareness campaigns to educate people on how to avoid misinformation.