The outgoing leader receives the ambassador of a country of whom he stayed closely in touch with his leadership since elected in 2017. 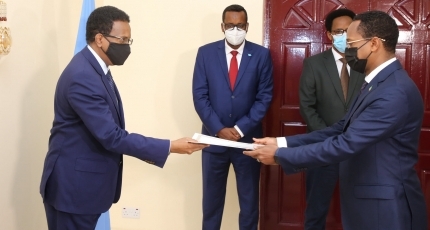 MOGADISHU, Somalia - The outgoing President Mohamed Abdullahi has on Monday received the credential letter from the new Ethiopian Ambassador to Somalia, Abdifatah Abdullahi Hassan at the presidential palace Mogadishu.

The new ambassador has conveyed a greeting message from Ethiopian ceremonial president Madam Sahle-Work Zewde to Farmajo during their meeting.

During his presidency, Farmajo developed close ties with arch-foe Ethiopia and has been part of a new tripartite East Africa alliance formed by PM Abiy Ahmed.

Hassan has expressed the commitment of his country to continue working with Somalia in security and development fields and highlighted the importance of respecting the sovereignty and dignity that every country deserved.

Farmajo cut ties with neighboring Kenya summoning Somalia's ambassador and expelling its envoy from Mogadishu early this year over allegations of Nairobi's frequent interference in the country.

Now, the Somali government is accusing the brotherly country of Djibouti of meddling in the nation's internal affairs after the recent AU peace and security council statement was condemned Farmajo's term extension.

Both Djibouti and Kenya and troop-contributing countries to the AU mission in Somalia [AMISOM] which is protecting the weak Somali government from Al-Shabaab.