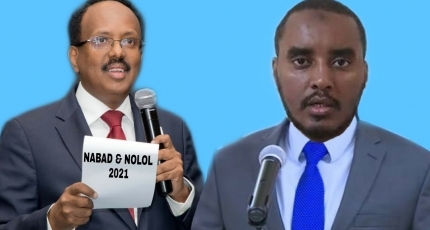 MOGADISHU, Somalia - The two most powerful men in the outgoing government, Farmajo and Fahad Yasin, are plotting to take over a majority of seats in the upcoming Somali parliament, sources told Keymedia English Service.

Fahad Yasin has compiled a list of more than 200 loyalists and intelligence agents to become members of the two houses of parliament, whom he wants to vote for Farmajo in the next presidential election.

Yasin, a former Al Jazeera Arabic Mogadishu bureau chief is leaning on Qatar funds to defeat the opposition vying for the top seat in the next election in Somalia which is slated for July 2021.

To reach his goals, Fahad is meddling the PM’s work on the formation of neutral election commissions as he strives to hold the accused NISA members in FEIT, SEIT, and the dispute resolution body.

The outgoing president Farmajo won the 2017 election after receiving millions of US dollars from Doha through Yasin, who is currently serving as head of the National Intelligence and Security Agency [NISA].

As the country heads to the indirect election next month, a political temperature is felt in Mogadishu with the opposition and the sitting president are in a tough race for the presidency in the long-delayed vote.

As universal elections are not yet possible in Somalia, the leaders of the government and regional states have agreed last month to hold enhanced clan-based polls, in which Electoral colleges elect the 275 MPs of the Lower House while the 54 seats of the Senate will be picked by the regional parliaments.

The President will be elected by members of both Houses of Parliament, in accordance with the Provisional Federal Constitution, a system that Somalia had practiced for the last three decades.