Farmajo attempts to ‘silence’ political opponents as he seeks reelection

The EU ambassador to Somalia Tiina Intelmann described MP Amina's murder as a politically motivated killing that came during the electioneering period in the country. 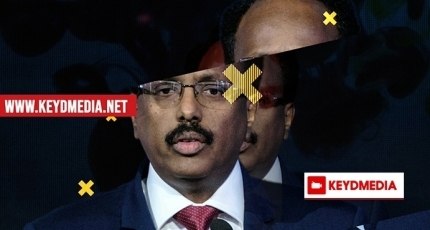 After his attempts to extend his term by two more illegal terms last year, Farmajo made efforts to erode the country’s democratic institutions with what the opposition says is a tactic to dictatorial rule.

These attempts to silence political opponents mark just one example of how democratic institutions are being eroded under President Farmajo,' said a political analyst Jama Hirsi, speaking to KON.

Farmajo is using any means he can realize his dream to become the second dictator of Somalia after the late Mohamed Said Barre, who ruled the country with an iron fist from 1969 to 1990.

Under his leadership between 2017-2021, the country has experienced politically motivated killings, attacks on press freedom, and jailing of government critics using public resources and the army.

In December 2017, NISA - the National Intelligence and Security Agency under Fahad Yasin, Farmajo's right-hand man attacked the residence of a leading opposition leader Abdirahman Abdishakur near Mogadishu airport, killing his bodyguards and arrested him with gunshot wounds.

I learned from a NISA source that 8 of those who carried out the botched attack at my residence in Mogadishu in December 2017 who defected from Alshabab have re-joined back to al-Shabaab. This is a clear indication of how NISA is deeply compromised and used by terrorists,' he tweeted in May 2018.

In February 2021, a retired General Mohamed Nur Galal was killed in an alleged 'facilitated Al-Shabaab attack' at Afrik hotel in Mogadishu. He was one of the greatest military generals and the 1977 Somalia-Ethiopia war hero.

Last night, a member of the Somali parliament Amina Mohamed Abdi was killed in a suicide bombing in Beledweyne city. She was a vocal critic of Farmajo and fought hard for the justice of Ikran Tahlil.

The twin blasts in the city left at least 48 people dead while wounding 108 others, including politicians, soldiers, and civilians, according to the president of HirShabelle state Ali Gudlawe.

The EU mission in Somalia and opposition leaders described her death as politically motivated murder and called for an investigation. She was killed while campaigning to retain her seat, vying against a Villa Somalia-backed candidate, according to the sources.